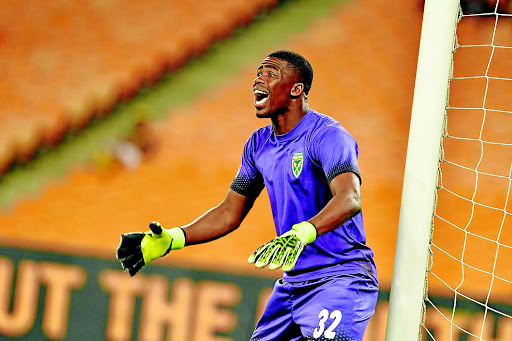 Golden Arrows coach Steve Komphela has defended his goalkeeper Nkosingiphile Gumede after their 3-2 home defeat to SuperSport United at the weekend.

Just when a draw looked certain, Teboho Mokoena produced a piece of magic when he beautifully unleashed a 30-yard strike, catching a hapless Gumede by surprise with four minutes remaining in regulation time.

It was Komphela's first defeat at Arrows, having gone five games without a loss, with three wins and two draws.

"I cannot fault him [Gumede]... these things happen. You can go as far as the World Cup in Russia, as far as the Champions League. Great goalkeepers will make mistakes," said Komphela.

"You can come to SA, a lot of keepers make mistake. Only those who do not work do not make mistakes, but those who are in the business of football will always make these mistakes."

In what was arguably one of the most fascinating games this season, the Abafana Bes'thende mentor felt they were better than Matsatsantsa.

Komphela has demanded the same commitment from his players in their next match against NFD side Witbank Spurs in the last 16 of the Nedbank Cup on Saturday.

"Open game? Yes, it was. nice to watch. I feel we had a better feel of an open game than SuperSport. There are very few negatives. In fact, the only negative would be the result," noted Komphela.

"We keep working. We are not going to underestimate the opponents [Spurs]. You have to be serious and work on your game model.

"Based on our second half performance against SuperSport. we can look back and say how we can develop this further?"