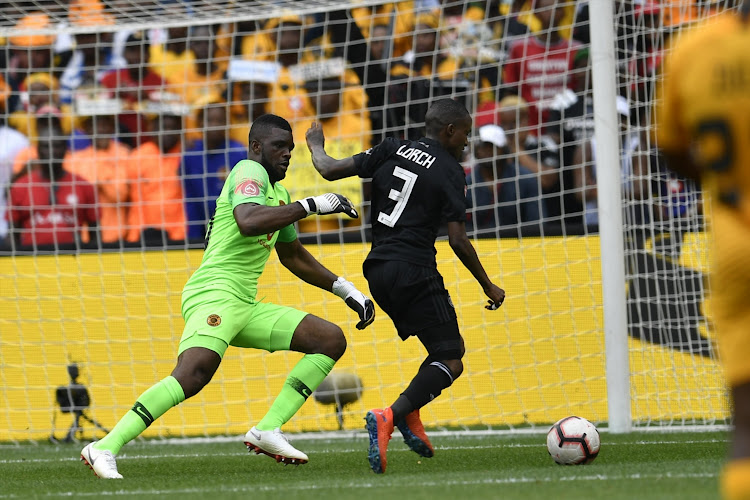 Soweto Derby #166 between rivals Kaizer Chiefs and Orlando Pirates had flashes of excitement with a disputed penalty and a brilliant equaliser‚ but as an overall spectacle‚ this latest installment of Southern Africa's biggest game will be quickly forgotten.

There are those who say that because it was tactical game of chess‚ the two teams cancelled each other out but in reality it was a game riddled with errors‚ persistent turn overs and an absence of proper passing.

It took Pirates some 70 minutes to get a shot on target while Chiefs were equally powder puff both in the build-up and in front of goal.

Here is how the players on the day rated‚ with marks out of 10:

Daniel Akpeyi (7): A solid enough debut from the Nigerian as he was thrust into the deep end but ended up not having much to do.

His first real save came in the last 20 minutes of the game and he looked competent when called upon. There was little he could do about the goal as Thembinkosi Lorch went around him to net.

Siphosakhe Ntiya-Ntiya (5): Did not get forward enough with another Soweto derby debutant Happy Mashiane ahead of him on an overloaded left hand side.

Daniel Cardoso (7): Strong and aggressive‚ looking to dominate the air and defend set pieces and pushing into midfield when demanded to tackle too.

Teenage Hadebe (8): Many timely tackles and some gutsy challenges as he took many knocks. He is very quickly convincing new coach Ernst Middendorp he is the best centre back that Chiefs have.

Kgotso Moleko (6): Had a tough afternoon dealing with Lorch but made a goal-saving tackle on Ben Motshwari.

He did not venture forward enough down the right flank.

George Maluleka (5): Picked to boss the midfield ahead of Willard Katsande‚ who was a surprising omission‚ but did not use the opportunity to show he offers more in driving forward and with his passing range.

Pule Ekstein (5): Middendorp said afterwards that Ekstein is one of the best players he has ever worked with but while he has obvious talent and important acceleration‚ he is not strong enough on the ball‚ makes poor decisions‚ is prone to wayward shooting and gave away possession that led to Pirates’ goal.

Happy Mashiane (4): It was only his third game for Chiefs and it is wonderful to see such confidence in a young player. But often that becomes arrogance and careless back heels and no-look passes have no place in a match like the derby. Jerked off at half-time.

Bernard Parker (6): Worked hard through the 90 minutes from a position out on the right hand side and attempted more shots on goal than any other Chiefs player.

Khama Billiat (4): Billiat can be a match winner but that is increasingly a rare occurance. He was supposed to play closer in to Leonardo Castro to try and pick off the second ball but very quickly drifted off cue and was ineffective.

Leonardo Castro (5): Not enough service for him to provide touches for Billiat or make opportunities for himself. Taken off after 66 minutes.

Philani Zulu (5): Came on for the second half and was more solid than Mashiane but did not offer much going forward‚ or by cutting inside as he likes to do.

Willard Katsande (no mark): On in the 66th minute for Castro as Middendorp tried‚ unsuccessfully‚ to close up shop.

Ramahlwe Mphahlele (no mark): On in the 82nd minute as right wing back rather than defender.

Wayne Sandilands (7): Pirates coach Milutin Sredojevich did not properly explain before the game why Sandilands was chosen to play his first league match since August.

It threatened to go pear-shaped early when he was cluttered into by Parker and made some shaky saves in the minutes thereafter.

But Chiefs did not test him enough and Sandilands came out top in the end with a diving save to deny Billiat a stoppage time winner.

Asavela Mbekile (5): Gave away the penalty albeit with a soft touch on Billiat. The point‚ however‚ is what were his arms doing wrapped around an attacker in his own box‚ never mind how slight the contact.

Happy Jele (6): Not convincing as he let dangerous balls bounce and took some risky gambles in getting the ball out of defence but was also effective in seeing off the twin threat of Billiat and Castro.

Alfred Ndengane (5): A clumsy tackle in the first half looked on review to be a legitimate penalty claim for Chiefs but he got away with it. This was his first derby.

Innocent Maela (5): Many ventures forward but often it was with a lot of pace and little else. Gave away the ball too often‚ did not get any telling crosses in and is proving ineffective of late.

Ben Motshwari (8): Deserved the man of the match award for his surging runs through the middle and that exquisite pass that set up the equaliser for Lorch.

Xola Mlambo (5): Strong tackling but his passing range is too short and he is too often caught in possession. Frankly‚ he is too slow.

Musa Nyatama (6): Always puts in a good shift but did not make any impact and went off after an hour.

Vincent Pule (6): His first half on the left hand side of the Pirates attack threatened much but he faded after the break. He did well to find a space in between the 70th minute and have a clear header at goal but steered it tamely into the hands of Akpeyi.

Thembinkosi Lorch (6): Began very dangerously but then strangely switched off and went missing for the bulk of the game before popping up again to score a delightful equaliser - his third derby goal.

Justin Shonga (6): Good toil and not impact as he saw little ball and had little opportunity. Had one free kick chance but that proved unsuccessful too.

Augustine Mulenga (6): The Zambian international came on with a real energy for the last 30 minutes and wanted to try and effect a change but found little support from teammates.

Mpho Makola (no mark): On for Mlambo for the last 20 minutes but sat too deep to be effective.

Nyasha Munetsi (no mark): Came on for the last six minutes of the derby.

Ajax Cape Town have reached an undisclosed settlement with the Premier Soccer League over their relegation from the Absa Premiership at the end of ...
Sport
3 years ago
Next Article