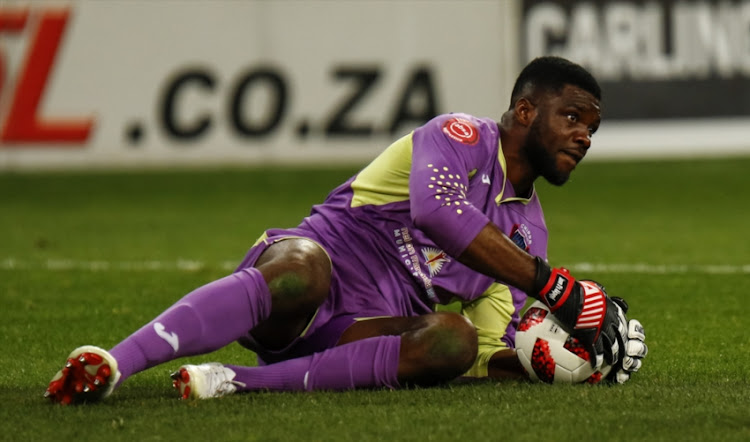 Daniel Akpeyi is set to make his Kaizer Chiefs debut in the Soweto derby against Orlando Pirates on Saturday after coach Ernst Middendorp confirmed that the Nigerian-born goalkeeper has received his work permit after joining Amakhosi a few hours before the close of the January transfer window.

While the German-born coach was at pains to avoid confirming Akpeyi as a certainty for the Chiefs No1 shirt ahead of the Absa Premiership showdown against Orlando Pirates‚ he himself has not been shy to voice his displeasure at the number of costly blunders committed by goalkeeper Virgil Vries in previous matches.

Vries has been the preferred keeper in the Chiefs goal in the absence of injured club captain Itumeleng Khune‚ who is only likely to make a comeback next season.

“Akpeyi is available for selection‚ that’s my information as now as we are standing here‚” said Middendorp on Thursday.

“I’m quite convinced that Akpeyi will be one of the keepers we have available to choose from for the Soweto Derby on Saturday.”

Chiefs will be desperate to win this latest edition of the derby after suffering three successive losses against their traditional rivals last year.

A victory would also keep them in the title hunt but Middendorp has several other concerns to worry about.

The absence of dynamic attacking midfielder Lebohang Manyama - another key Chiefs player who will only return next season – is likely to be felt but the German coach tried very hard to downplay their absence.

“I think that’s unfair (to refer to the absence of Khune and Manyama and its impact) and I keep repeating it every time‚" he said.

“It’s unfair to the players who are now taking hold of the positions of these players you mentioned just now.

“We should give them the respect (the players that are available) from our side‚ the coaching side and of course from each and everybody and the fans side too.

“I’m not crying because of the players that are unavailable.

"It happens and it is part of the game and at the moment we have to find a replacement for these so-called first XI players like Lebo or Itu.”

Middendorp‚ who began his second stint at Chiefs on December 9‚ said he's yet to talk to his players about the defeats they suffered to Pirates last year.

“I haven’t really spoken about it at all‚” said Middendorp‚ who won three matches and drew one against Pirates in his previous spell at Naturena from 2005 to 2007.

“At the moment I don’t have to calm down‚" he said.

"I don’t have to motivate and I don’t have to put something in place because everybody who is part of this journey should be ready to prove what he can bring out and be a little more than in a normal game.”