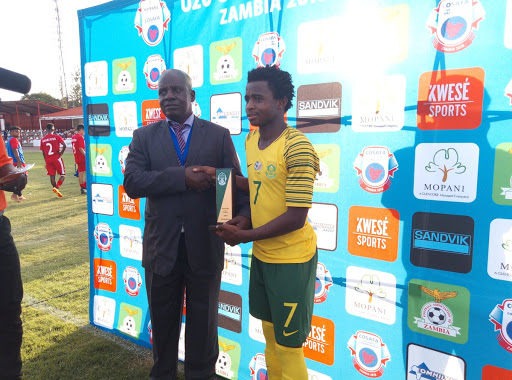 The absence of Monaco striker Lyle Foster has blunted Amajita's attack, with Promise Mkhuma and Thabiso Monyane so far failing to rattle the net.
Image: TWITTER/SAFA

Amajita's over-reliance on striker Lyle Foster has seen them struggle without him in the ongoing Under-20 Africa Cup of Nations in Niger.

Thabo Senong's side was compelled to go to Niger without their key man Foster after his French club Monaco refused to release him for this biennial youth tournament.

In Foster's absence, the Amajita's front-line is spearheaded by Promise Mkhuma and Thabiso Monyane.

The inexperienced pair appear to be out of depth as SA have drawn both their Group A matches against hosts Niger (1-1) and Nigeria (0-0).

Foster has always been Amajita's source of goals. He was last year's Cosafa Cup top-scorer and netted four goals in the Afcon qualifiers.

Amajita share spoils with Nigeria in Group A opener

Siphesihle Mkhize scored a vital equaliser for South Africa as they came from behind to secure a 1-1 draw against hosts Niger in their opening Group ...
Sport
2 years ago

SA's only goal in the tournament so far was scored by Siphesihle Mkhize of Gauteng SAB League side M Tigers against Niger last Saturday.

"You could see that we miss some players in attack. Unfortunately, the club did not release him [Foster]. He's one of the best players in our team . our team is affected in attack. We have to work with what we have," Senong admitted.

The top-four finishers in this competition will represent Africa in the Fifa World Cup, starting from May 25 to June 16 in Poland this year. Amajita are third in Group A standings, level with second-placed Niger on two points, two adrift of leaders Nigeria.

To qualify for the knockout phase, Amajita need to win their last group match against Burundi tomorrow (5.30pm). A draw can also see SA advance as the group's runners-up, provided Nigeria beat Niger. "I still believe we have a good plan against Burundi. We are optimistic we will qualify for next phase," said Senong.