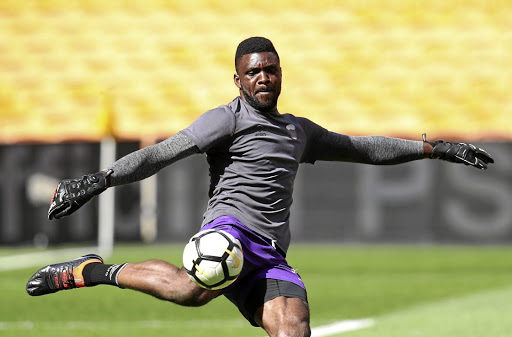 Nigeria international Daniel Akpeyi’s experience weighed in his favour as he was signed by Kaizer Chiefs to help solve their current problems in that department‚ Amakhosi football manager Bobby Motaung has said.

The signing of Nigeria international Akpeyi was completed on Thursday‚ on the final day of the transfer window.

He arrives as Chiefs’ Virgil Vries has struggled making numerous errors getting game time between the posts while Bafana Bafana No 1 Itumeleng Khune is out with a shoulder injury until the end of the season.

“With ‘Itu’ [Khune] out injured‚ we are obviously challenged when it comes to experience and we had to look for an experienced goalkeeper who will take us forward and compete with the challenges that we had.

“We left the issue in the hands of the goalkeeper-coach [Lee Baxter] to look for someone and fortunately on Wednesday we finally came into discussion with Chippa‚ and they were willing to release him to us.

“It was a blessing to get an experienced goalkeeper like him who was at the World Cup [in Russia] last year.

“This was a blessing because he is No 1 at Chippa‚ and who will sell their No 1 keeper at this time of the season? Even Ajax Cape Town in the NFD did not want to sell their keeper and fortunately Chippa allowed to give Akpeyi.

“We did engage Darren Keet at Bidvest Wits because I knew that his contract is coming up to an end in June but unfortunately he is moving overseas permanently.”

Kaizer Chiefs would like to confirm the signing of goalkeeper Daniel Akpeyi from Chippa United. He has signed a contract for 1 year and 5 months.