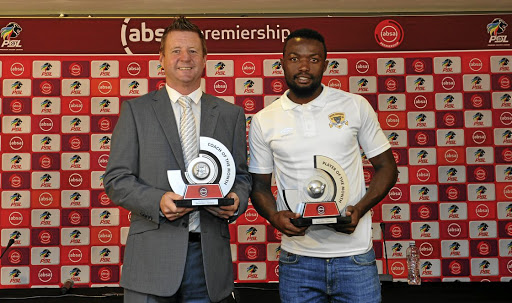 The duo were yesterday named the Absa Premiership coach and player of the month for December/January. They collected their awards, which come with R5000 each courtesy of sponsors Absa, at the Premier Soccer League's offices in Parktown, Johannesburg.

Mwape is now the PSL's top scorer with eight goals and Leopards are playing some of their best football at the moment.

The Zambian believes there's more to come from him and is confident he will do better.

"I think the coach [Kerr] is right in saying that I haven't done anything yet - it's true. I've played 15 [league] games and I've scored eight [goals], but I don't think I'm satisfied with that number," said the former Orlando Pirates and Golden Arrows marksman.

"If I'm going to be excited about scoring eight goals, then I don't know what I'm doing as a striker," added the 28-year-old.

Kerr, meanwhile, is pleased with his side's progress since joining them from Kenya's Gor Mahia in November.

"But I don't want anyone getting carried away with it, because as I said from day one, we've done nothing yet. I wanna keep it quiet and focused on what we have to do week in and week out," Kerr told the media.

Kerr guided Lidoda Duvha to home victories over SuperSport United and AmaZulu, an away win against Baroka and a 1-1 draw with Golden Arrows.

The December-January period saw Leopards collect an impressive 10 points from a possible 12 under Kerr's guidance and they are currently placed 11th on the log.