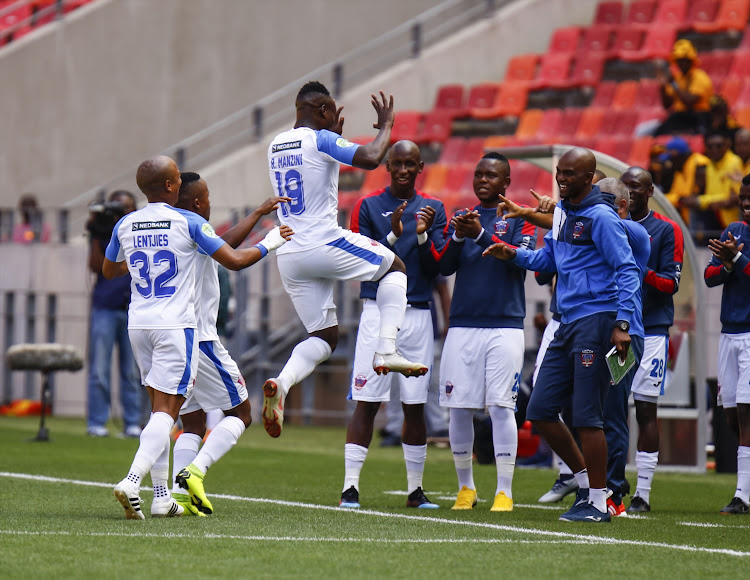 Chippa United striker Rhulani Manzini celebrates with teammates and the bench after scoring the opening goal during the Nedbank Cup first round match match against Mamelodi Sundowns at Nelson Mandela Bay Stadium in Port Elizabeth on January 26, 2019.
Image: Michael Sheehan

A last gasp header from defender Frederic Nsabiyumbva handed Chippa United a shock win over Mamelodi Sundowns in the first round of the Nedbank Cup at the Nelson Mandela Bay Stadium in Port Elizabeth yesterday (on Saturday).

It was a dramatic conclusion to a rock n ‘roll game where action went from one end to the other as the giant Burundian got his head to a corner that Sundowns‘ usually reliable goalkeeper Denis Onyango missed as he came out to try and clear.

It means new coach Clinton Larsen has won a second game since his arrival at the relegation-haunted club, who will enjoy a major boost from this major scalp.

Sundowns made clear where the cup sits as priority with the six changes made to their line-up but will still feel they missed out on a chance to keep up their domestic dominance.

For coach Pitso Mosimane, it is a target behind the Caf Champions League and looking to retain their league crown but, even resting regulars, Sundowns still put out a formidable side.

Lucky Mohomi and Sphelele Mkhulise were given a rare run-out but struggled in the beginning as Chippa wasted no time in taking the game to their visitors.

Mohomi’s lack of sharpness saw him give away a free kick on the edge of the area as early as the third minute and Rhulani Manzini blasted it home with another of the rocket-like freekicks which are fast earning him a fearsome reputation.

It should have been 2-0 inside the opening five minutes as Thabo Rakhale broke free but his decisive touch allowed the ball to get away from him and give Onyango a chance to come out and make a brave save.

Manzini then whistled another thunderbolt of a free-kick wide and Rakhale missed a sitter in front of goal in the 20th minute after a sweeping passing move displayed the home side’s confidence.

Then, just past the half hour mark, Sundowns defenders were caught backing off, to allow Tercious Malepe to fire a long range speculative effort against the crossbar.

But from the resultant clearance, Gaston Sirino played a delightful pass over the top of the Chippa defence and Phakamani Mahlambi ran away on goal before finishing into the corner of the goal for the equaliser.

Just after half-time, Andile Jali’s first game since mid-December ended with a recurrence of his troublesome hamstring injury.

Rakhale had another chance in the 54th minute but he lacked power on his effort.

Then quickly followed two excellent chances for Sundowns:  Mahlambi should have had his second after Sirino’s square pass cut open the defence but his teammate Themba Zwane inadvertently got in the way before new boy Mkhulise struck the crossbar with an angled effort.

But it was all forgotten as Chippa snatched victory with virtually the last touch of the game.

Changing the team’s starting lineup is never good for any side when it comes to keeping the momentum and results.
Sport
3 years ago
Next Article