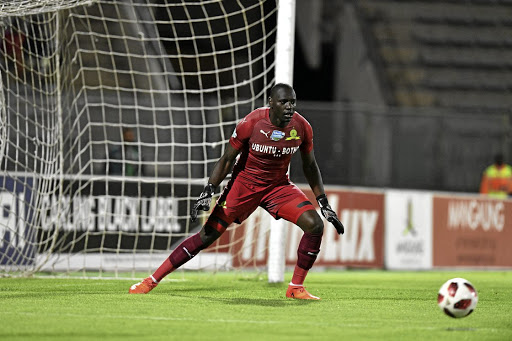 Mamelodi Sundowns goalkeeper Denis Onyango has returned to full fitness just in the nick of time as the club prepare to make a strong push for trophies on three fronts.

With the season having reached the business end, Sundowns are eyeing glory in the Premiership, Nedbank Cup and CAF Champions League.

"It feels good to be fit again and able to contribute to the team at this important stage of the season," Onyango said.

"It's a challenge because we are moving from one cup competition to the other. It's about building momentum as we approach the end of season."

The Uganda number one stopper was the only African-based player named in the CAF Best Africa XI last week among a foreign legion of stars such as Sadio Mane, Mohamed Salah (Liverpool), Eric Bailly (Man United) and Pierre-Emerick Aubameyang (Arsenal).

"It was fantastic for me, the club and the PSL because it shows that we have quality players here," he said.

"There are many leagues in Africa and to have player in the best team coming from the PSL is a positive thing. It shows we are just as good and have the best league in Africa."

Downs will be in action in the Nedbank Cup first round against Chippa United in Port Elizabeth tomorrow (3pm).

"We believe by the end of the season we must have won at least two cups," he said.

"Chippa always enjoy playing against us, especially in their backyard. We are aware of that danger, their players bring their A-game against us."