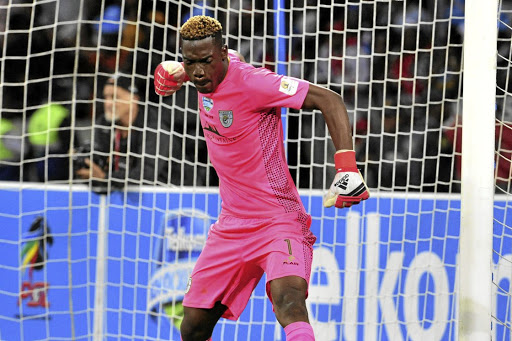 Baroka goalkeeper Elvis Chipezeze has come in for a lot of flak for time-wasting.
Image: Deryck Foster/ BackpagePix

Limpopo side Baroka have seemingly earned themselves the nickname "Idibala FC" after their time-wasting antics in the 1-1 draw against Orlando Pirates in their midweek clash at Orlando Stadium.

Bakgaga took a first-half lead through a fantastic free kick by Matome Mabeba, but Vincent Pule cancelled their lead late in the match for the teams to share the spoils.

Baroka coach Wedson Nyirenda was happy to take a point away from one of the title contenders, but was unhappy with questions around his players' "Idibala" or loosely translated- fainting moments - from the song Malwedhe by Limpopo artist King Monada.

The main culprit was goalkeeper Elvis Chipezeze, who was down one too many times complaining of cramps.

It was not the first time Chipezeze was in the spotlight for time-wasting. Last month, he was criticised for "killing time" by Sundowns coach Pitso Mosimane when the two sides played to a goalless draw at Lucas Moripe Stadium.

However, Nyirenda said other coaches have no right to talk about what his team gets up to during the match.

"Chipezeze is a good goalkeeper and I do not talk about other teams' players, so why should other coaches talk about my players? I'm seeing nasty things from other players and I don't talk about it. I concentrate on my own players," said the Zambian.

Meanwhile, Nyirenda said there was no pressure on him from club boss Khurishi Mphahlele to save the team despite the fact that they are lying in 13th spot with 12 matches remaining.