Sundowns move up to third with win over Highlands Park 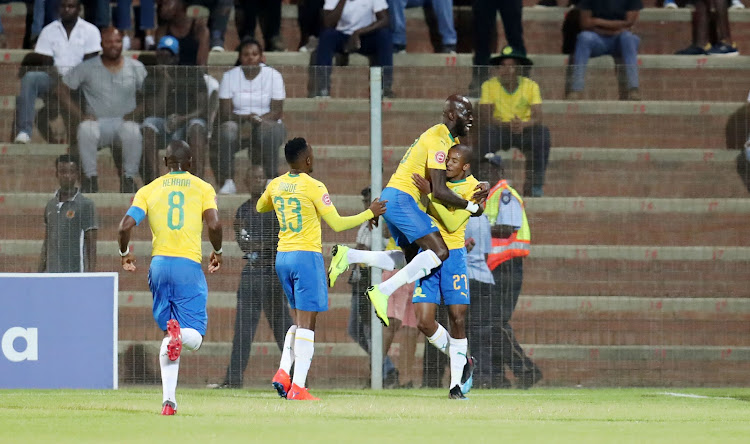 Thapelo Morena of Mamelodi Sundowns celebrates his goal with teammates during the Absa Premiership match against Highlands Park at the Makhulong Stadium in Tembisa on January 22 2019.
Image: Muzi Ntombela/BackpagePix

Mamelodi Sundowns had sweat hard to inflict a first Absa Premiership defeat in seven games on Highlands Park, 2-1 at Makhulong Stadium in Tembisa on Tuesday night.

It is the pace of the games at this ground that can alarm big-name visitors.

In a frantic first half Thapelo Morena in the 12th minute and Themba Zwane in the 20th gave Downs a 2-0 lead.

Lindokuhle Mbatha pulled one back in the 31st.Sundowns sensibly slowed the action to a speed of their comfort in the second half, though even then Highlands pried.

Owen Da Gama's Park had been the consistent and tough, coming into the game unbeaten in six, and in ninth place.

It seemed a mark of Downs coach Pitso Mosimane's respect that, with the suspension to Gaston Sirino, he tried something innovative in his frontline, employing Morena as a tearaway No 9.

For the first 20 minutes Highlands - and especially rusty centreback Bevan Fransman - had no answer.Fransman was beaten for pace twice by normal right-back Morena.

Then the flustered centreback lost the ball to Anthony Laffor at his left touchline, won it back, and panicked with a backpass that the lurking Morena intercepted, then ran through to finish off goalkeeper Tapuwa Kapini.

It was Morena's first league goal of the season.Morena opened Highlands down the right, and squared for Lebohang Maboe's attempt to be cleared off the line.

Then he opened Park down the left and, with Fransman in front of him, picked out Zwane to run through, knocking the ball too far ahead and allowing Highlands centreback Sphiwe Msimango to have possession.

But Zwane won it back and finished past Kapini from a tight angle.Highlands fought back, though as much through their own fire as a mistake by Denis Onyango.

The Downs keeper spilled a pedestrian cross from Luckyboy Mokoena to Mbatha, who slotted.Peter Shalulile beat offside as Onyango redeemed himself with a save.

The excellent Mbatha had a run down the left and curled one onto Onyango's crossbar.

Maboe turned Msimango and forced a save off the legs of Shalulile. Unsurprisingly, Denzil Haoseb replaced Fransman from the change rooms.

Sundowns sensibly tried to slow things down in the second half.

Highlands did not panic and showed they could play the probing game too.

Downs could have had the killer goal when, from Lakay's chip and Maboe's chest, Zwane shot into Kapini's legs.