Banyana Banyana play to a goalless draw against Sweden 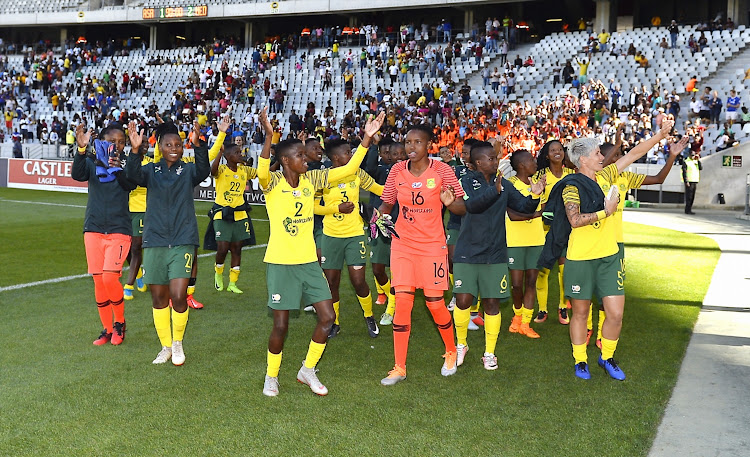 Banyana Banyana will be happy with their performances in the two matches against top class European opponents.
Image: Ashley Vlotman

Banyana Banyana wrapped up their January international programme with a hard-fought 0-0 draw against visitors Sweden in the Albertina Sisulu Centenary Challenge at the Cape Town Stadium on Tuesday night.

It was an accomplished performance from South Africa, if a little lacking in bite upfront, one that showed excellent organization and work-rate to keep Sweden, ranked number nine in the world, largely at bay.

Admittedly many of the Swedish players had not kicked a ball in anger since October, but Banyana more than matched them in every department, another performance to give some confidence heading to the Women’s World Cup in France in June.

Banyana coach Desiree Ellis made four changes from the side that lost 2-1 to the Netherlands at the weekend, with one enforced switch as captain Janine van Wyk missed out with a groin injury.

She was replaced by veteran Noko Matlou, who won a 149thinternational cap in the heart of the defence.

Andile Dlamini took over in goal from Kaylin Swart, Koketso Tlailane earned a first start and Rhoda Mulaudzi came in as Leandra Smeda and Jermaine Seoposenwe dropped to the bench.

Banyana made a brighter start than on Saturday, when they were two goals down inside 20 minutes, and had much of the early running, though without testing Jonna Andersson in the Sweden goal.

African Women’s Player of the Year Thembi Kgatlana twice got behind the Sweden defence out wide, but on both occasions her delivery into the box was off the mark.

Kgatlana did show a bit of magic when she latched onto a long ball and danced away from a defender before laying on a scoring chance for Mulaudzi, whose effort was far too weak.

The Swedes passed the ball around neatly in the opening period without ever really testing Dlamini in the home goal.

They looked most threatening from set-pieces, with the noticeable height difference between the teams giving them the advantage.

Sofia Jakobsson had a shot late in the half that floated over the South African bar in what was the closest the visitors came to a goal in the first half.

There was a moment of controversy in the dying seconds when Kgatlana looked to be through on goal, but was denied by thee offside flag when clearly she was on.

Smeda was introduced at the start of the second half for Tlailane but Dlamini was forced into the first save as she had to get down smartly to stop an effort from Julia Zigiotti Olme.

At the other end, Banyana skipper for the night Refiloe Jane went close with a 25-yard shot that was just wide with Andersson struggling.

Kgatlana had a trademark run on goal that ended with a well-hit shot from the edge of the box being saved, while Linda Motlhalo’s volley at the back post was narrowly wide.

Minutes later and Sweden had an excellent chance to take the lead when Hanna Glas’ perfect cross was headed over by substitute Madelen Janogy.

Paris St Germain star Glas then came closest to a goal when she cut inside and unleashed a powerful shot from the edge of the box that crashed against the crossbar with Dlamini well beaten. Seoposenwe went just wide with a free-kick late on that half the stadium celebrated wildly, thinking the ball had gone in.

Next up for Banyana is the Cyprus Cup where they meet Finland (Feb. 27), North Korea (Mar. 1) and Czech Republic (Mar. 4) in more vital preparation ahead of the World Cup.

It might come as a surprise to some that there’s a soccer player in Guinea who uses the Mandela family name and Horoya AC captain Mandela Ocansey has ...
Sport
3 years ago

In a humorous‚ but also perhaps not-so veiled‚ hint that was on a par with Cuba Gooding Jr’s character’s “show me the money” line in Jerry Maguire‚ ...
Sport
3 years ago
Next Article