Themba Zwane scores twice as Sundowns get the better of Wydad 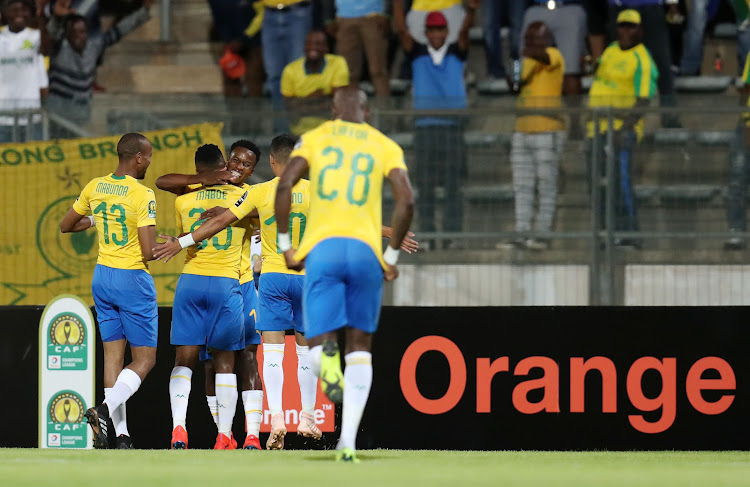 Mamelodi Sundowns attacking midfielder Themba Zwane (C) celebrates with his teammates after scoring one his two goals in a 2-1 Caf Champions League match at home against Wydad Casablanca at the Lucas Moripe Stadium in Atteridgeville, west of Pretoria, on January 19 2019.
Image: Muzi Ntombela/BackpagePix

Mamelodi Sundowns’ campaign in the Caf Champions League group stages is up and running after they beat Wydad Casablanca 2-1 in their match-day two encounter at Lucas Moripe Stadium on Saturday night.

Themba Zwane scored the crucial two goals during their highly emotionally charged clash in Atteridgeville that ensured the Brazilians overcame this highly experienced Moroccan side to move from the bottom of the log to second spot in Group A after two matches.

Sundowns went into match under pressure following their 2-1 loss to Nigerian champions Lobi Stars away from home two weeks ago but this massive victory has refreshed their campaign even though they did it the hard way as they wasted too many scoring opportunities in the first half.

Though it was a team performance, the star of the night was undoubtedly Zwane with the crucial goals in either half and they will travel to Ivory Coast to meet Asec Mimosas in their next match early next month with their confidence sky high.

Sundowns opened the scoring in the ninth minute through midfielder Zwane when he riffled a low shot past the Wydad goalkeeper Ahmed Manar after he received a cross from the right flank by Lebohang Maboe.

For the opener, Sundowns launched a quick counter attack with resulted in Gaston Sirino sending the ball to Maboe from where he delivered an inch perfect pass across the face of goal to Zwane, who had enough time to trap the ball and score.

The goal injected more life into Sundonwns’ work on the attack but their downfall was that they missed numerous scoring opportunities as Wydad tried to keep up with their furious pace.

In the 27th minute, Zwane was lucky to escape with only a yellow card after he pushed Wydad midfielder William Jebor to the ground in retaliation after he was tackled.

A few minutes later, Sundowns missed another opportunity to increase their lead when defender Musa Lebusa rose above everyone inside the Wydad box to connect with Thapelo Morena’s cross but his header was saved by Manar.

Sundowns were ultimately punished for missing a number of chances when Mohammed Nahiri equalised with a thunderous shot from outside the box to level the scores but they could not hold on as Zwane had the final say with a beautiful goal in the second half.