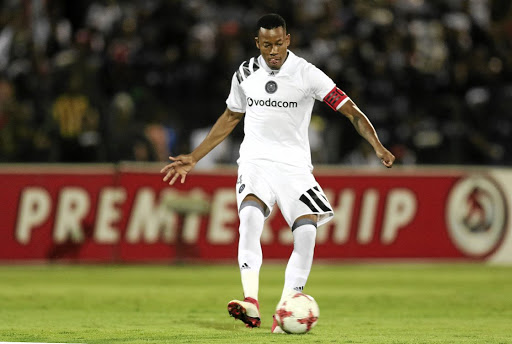 Orlando Pirates captain Happy Jele is happy to inspire and guide his less experienced teammates in the Caf Champions League as Bucs continue to fight to win Africa’s most prestigious club competition for a second time in their history.

Pirates‚ the 1995 champions‚ host Guinean club Horoya at Orlando Stadium at 6pm on Friday in their second Group B encounter and Jele has promised to help his teammates to understand what it takes to be resilient in a competition he nearly won with Bucs in 2013.

Bucs lost 3-1 on aggregate in that final to Egyptian giants Al Ahly and Jele is the only regular Pirates player remaining from Roger de Sa’s team that nearly won the much sought-after second star for the Buccaneers.

The other player still at Bucs but not featuring prominently these days is left-back Thabo Matlaba‚ who ironically scored the lone goal for De Sa's team in the 2013 final.

“It is a very important competition for the team and those guys who have never been there I have to motivate and tell them that they need to work hard for the team‚” said Jele‚ who celebrated his 32nd birthday on January 1.

The defender touched on his team’s 10-match unbeaten run at home in the Champions League and said it will be a big boost for them against a Horoya side yet to taste defeat against a South African team.

Horoya has faced Mamelodi Sundowns and SuperSport United in Caf competitions over the past three years and drew all those four matches home and away.

“I think it is a good record for our team and we need to keep pushing to protect it by trying to win the game against Horoya‚” Jele said.

“We hope our supporters will come in numbers even though they are not used to us playing on a Friday.”

Other than Jele‚ Pirates have Zambian striker Augustine Mulenga and former Sundowns right-back Asavela Mbekile as players with experience of playing in the group stages of the Champions League.

Pirates drew 0-0 with FC Platinum of Zimbabwe in their first Group B match last weekend while Horoya held reigning champions Esperance of Tunisia to a 1-1 in Conakry.