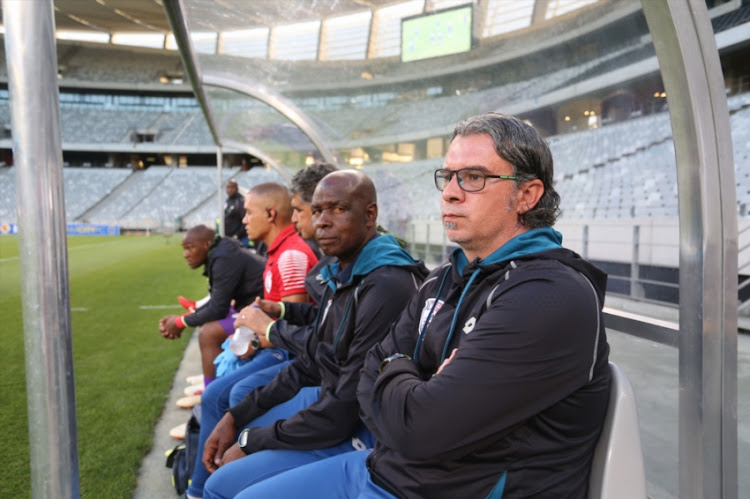 Nikola Kavazovic says he takes full responsibility for Free State Stars’ 5-0 hammering at the hands of Cape Town City in their Absa Premiership clash on Wednesday‚ and adds that the result will not affect the confidence of his players.

Stars trailed 1-0 at the break at Cape Town Stadium‚ but then conceded a penalty and moments later had Sifiso Hlubi red-carded for a rash challenge‚ a double blow that put them further on the back foot.

But Kavazovic continued to chase the game‚ perhaps naively sending his fullbacks careering into the City half‚ which gave the home side all the space in the world in which to play and they took full advantage.

“It is my responsibility that we lost this game. The players know that after the first half of the season‚ we are playing very well‚ we are playing great football in the first two games [of 2019]. Their confidence is growing.

“We lost 5-0 in this game‚ but I can assure you my players did not lose one percent of self-confidence. We will come back much stronger and maybe this defeat will be good for them to keep them grounded.”

Kavazovic rather boldly claimed his side were the better team in the first half‚ but said the few moments of madness in the second period cost them dearly.

“We conceded a goal at a set-piece and that is somewhere we must improve. We are a small team‚ we don’t have tall players‚ so that is always a problem.

“The second half we responded well‚ we were chasing the equaliser but then we made an unnecessary contact in the box and that was the worst moment for something like that.

“They scored the penalty and a few minutes later we got a red card and were a man down.

“But I put on two strikers [Eleazar Rodgers and Sinethemba Jantjie] in order to try and create something and that was my mistake and my decision.”

He also suggested that a lack of leadership without the suspended Paulus Masehe was an issue.

“We have a lack of leadership on the field. We only have one leader in this team and that’s Paulus Masehe. We didn’t have anyone on the pitch to get the guys together after the third goal.”

Stars have been linked in the Botswana press with defender Simisani Mathumo‚ who plays for Kavazovic’s former side Township Rollers.

The coach claimed to know nothing of a potential deal – or even when the transfer window is open in South Africa.

“I don’t know what you are talking about. I don’t even know when the transfer window is beginning and finishing. I don’t know anything‚” he said.