Ertugral out to revive Ndlovu form 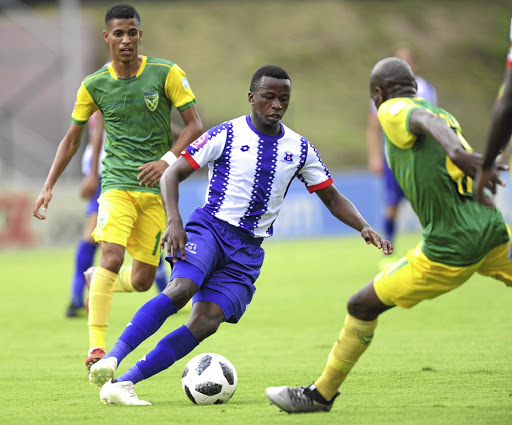 Siphesihle Ndlovu of Maritzburg United, centre, has been a shadow of his former self./ Gerhard Duraan/BackpagePix

Maritzburg United coach Muhsin Ertugral has made it his responsibility to assist star midfielder Siphesihle Ndlovu to regain the kind of form that saw him win the young player and midfielder of the season gongs last term.

"Obviously he has dropped in his approach but he will be back. We need to motivate him as quickly as possible. We need him at his best. I am determined to help him retrieve his best form," said Ertugral of Ndlovu, who is yet to score in his 14 Premier Soccer League matches this season.

In their 2-0 loss to Golden Arrows, which was his first match in charge, Ertugral substituted Ndlovu early in the second half. He only sent him on in the final nine minutes of the 2-1 defeat against Free State Stars last week.

Maritzburg are bottom of the log
Sport
3 years ago

"The willingness he [Ndlovu] had last season, is what we want from him again this season. Sometimes you need to protect him. put him on the bench. Not playing him is more about protecting him than a punishment or something," noted Ertugral.

Ndlovu is expected to leave the Team of Choice at the end of the season after it emerged that Mamelodi Sundowns have already struck a deal, in principle, with Maritzburg to sign him.

Maritzburg have only won once in the league so far, languishing at the bottom of the log.

The Team of Choice would surely be desperate to have Ndlovu back to his best when they travel to Sundowns for a crucial league clash at Loftus Versfeld Stadium tomorrow (7.30pm).

The KwaZulu-Natal-based outfit is expected to unleash its new strikers, Judas Moseamedi and Thabiso Kutumela.

Kutumela joined the club on a three-year deal from Orlando Pirates this week.

Moseamedi is on loan from Cape Town City for the remainder of the campaign.