Image: Gallo Images Jomo Sono and Phil Masinga with the World Cup trophy during its display at Fifa House in 2010.

Jomo Sono was emotional when he reminisced about the good old times he had with his departed "son", former Bafana Bafana centre forward Philemon "Chippa" Masinga.

The 49-year-old humble mannered Masinga from Klerksdorp in the North West had been ill for a few months before he died yesterday.

"I have lost my third son now," said Sono, who is credited with discovering and developing the talents of many footballers, including Masinga.

"The first one to depart was Sizwe Motaung [in 2001] and later Thomas Madigage [in 2012]. You know, when I found Phil he was so skinny. When he was warming up for his first official game against Pirates [in 1990], fans laughed at him, just at the way he was.

"But he scored the all-important goal for Cosmos with a header, and Pirates fans stopped laughing after that," Sono recalled. 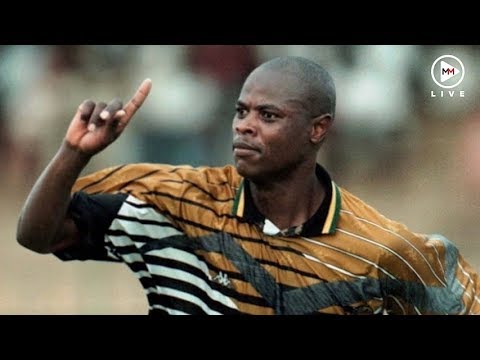 Sono later sold Masinga to Mamelodi Sundowns before he joined Leeds United in England where fans nicknamed him "Waltzing Masinga".

"It hurts so bad to lose your son," said Sono. "People do not understand the bond I have with most of the players that I have worked with. Phil left a legacy in the country. He was not only a good player but also a very good, grounded and humble human being."

Sono's other product Motaung, from Osizweni in Newcastle, played for Tenerife in Spain and St Gallen in Switzerland, before coming home to join Kaizer Chiefs and later Orlando Pirates. Motaung died in August 2001.

Madigage, from Burgersfort in Mpumalangs, left Cosmos to play for Zurich in Switzerland before rejoining Sono's Cosmos.

He later moved to SuperSport United where he ended his illustrious career and became assistant coach. He died in a car crash in 2012 while serving as Bafana Bafana assistant coach.