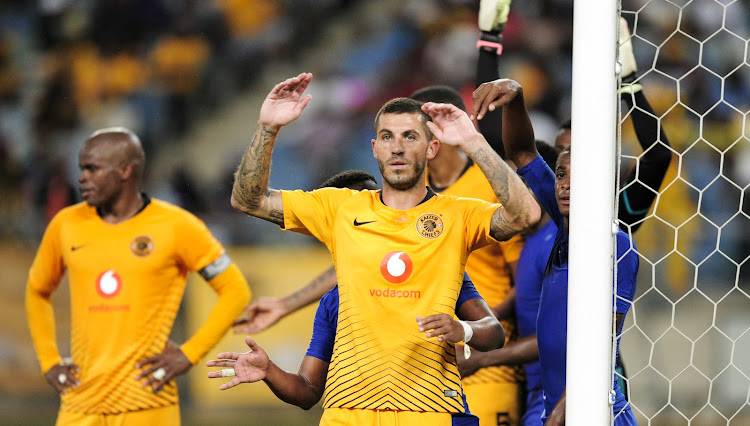 Khama Billiat was on target but Kaizer Chiefs succumbed to a 3-1 defeat against Zesco United at the Levy Mwanawasa Stadium in Ndola on Sunday to leave their participation in the 2018-19 African Confederation Cup hanging by a thread.

Kenyan forward Jesse Were scored a brace for the home side in the first leg of their play-off round tie‚ one from the penalty-spot‚ and Lazarous Kambole got the other as Zesco proved full value for their win and leave Chiefs with a mountain to climb in Saturday’s second leg if they are to reach the pool stages.

Chiefs’ only previous visit to Zambia for a competitive fixture was all the way back in 2000 when they were ousted from the now defunct CAF Cup by Nchanga Rangers‚ who won 2-0 in Soweto and then held the AmaKhosi to a 0-0 away draw.

Willard Katsande was restored to the midfield after missing the 2-0 premiership victory over BidVest Wits in midweek‚ one of two changes to that side as Kgotso Moleko and George Maluleka missed out.

Were had a big chance early on to give Zesco the lead but put his effort wide‚ before Katsande could not steer his header on target as he rose above the home defence.

Zambia international John Ching'andu was bossing the midfield in the first half and should have scored the opener after being teed-up by Were‚ but he too missed the target.

Central defender Misheck Chaila did well to block an effort from Billiat‚ before Hadebe headed over the bar from the latter’s free-kick.

The home side made the breakthrough their play deserved on 24 minutes though as Kambole‚ once a target for Orlando Pirates‚ latched onto a pass from Rahim Ousumanu and supplied a neat finish.

Zesco bagged a second six minutes later when Were converted from the penalty after Hadebe had hauled down the livewire forward in the box and Zimbabwe referee Norman Matemera pointed to the spot.

Were picked himself off the floor and double the advantage for the home side.

Chiefs pulled a goal back before halftime though as‚ shortly after Billiat had struck the post‚ he found the back of the net to halve the deficit.

Middendorp made a change at the break‚ bringing on Dumisani Zuma for Walusimbi‚ and they were almost level when Leonardo Castro’s rocket shot was pushed for a corner by Zesco goalkeeper Jacob Banda.

But Chiefs were still vulnerable at the back and after more good work from Kambole‚ he set up Were for his second on 53 minutes.

Billiat thought he had a brace midway through the second half but his effort was ruled out for offside as Zuma’s afternoon lasted just 23 minutes when he was withdrawn for Bernard Parker.

It almost got worse for Chiefs when Kambole missed a simple chance‚ while Billiat was again unlucky at the other end as his shot was saved.

Chiefs are next in action on Wednesday with an Absa Premiership clash against AmaZulu‚ while the return fixture against Zesco will be played at the FNB Stadium on Saturday night.