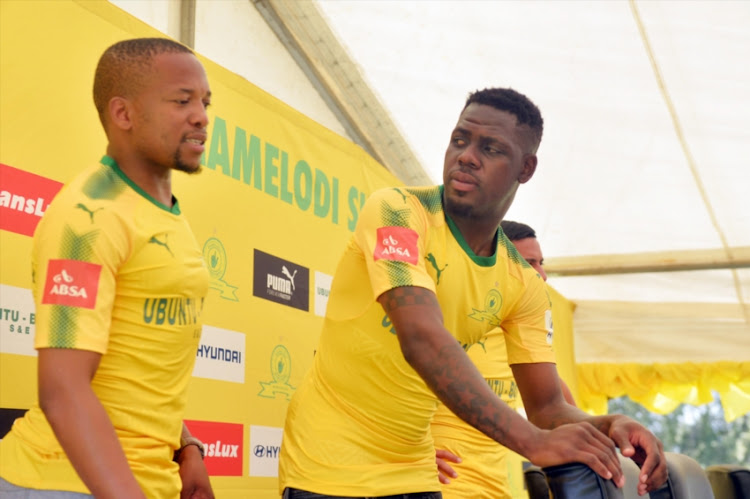 Siyabonga Zulu (R) with Aubrey Ngoma during a Mamelodi Sundowns press conference at Chloorkop before things went sour between the defender and the team.
Image: Lefty Shivambu/Gallo Images

Mamelodi Sundowns have terminated the contract of troubled former Bafana Bafana defender Siyabonga Zulu‚ who has not reported for training for almost a month.

Insiders have told SowetanLIVE that the contract of Zulu‚ who joined the Brazilians at the beginning of last year from the now-defunct Platinum Stars‚ was terminated in his absence after he failed to show up for a disciplinary hearing at Chloorkop on December 23.

While the decision to release him was already taken last month‚ Sundowns officials have not been able to track the player down so they can inform and him and hand him the dismissal letter.

This situation leaves his football career hanging in the balance.

This week‚ SowetanLIVE managed to track down Zulu through one of his friends but the left-back declined to talk about his precarious situation.

Troubled Mamelodi Sundowns defender Siyabonga Zulu has not reported for work for almost a month and has not set foot at the club's Chloorkop ...
Sport
3 years ago

He did promise to open up after he has spoken to his advisers at his intermediaries‚ Prosport International.

Mike Makaab‚ the chief executive of Prosport International‚ could not be reached for comment on Saturday morning as he did not answer his cellphone‚ and an intermediary (agent) at the agency‚ Alban Newman‚ did not want to comment.

Sundowns spokesperson Thulani Thuswa was not available to comment on the matter as he is in Nigeria‚ where the Brazilians lost 2-1 to Lobi Stars in their Caf Champions League group stage opener on Friday.

Sundowns coach Pitso Mosimane had high hopes for Zulu when he recruited him from Stars but he has run out of patience with the left-back‚ who had already appeared before two disciplinary hearings last year where he promised to mend his ways.

Zulu was a regular at Stars‚ who apparently were able to manage him despite his reputed wayward tendencies.

At Sundowns, he has seen limited game time‚ with Mosimane preferring Tebogo Langerman and Lyle Lakay at left-back.