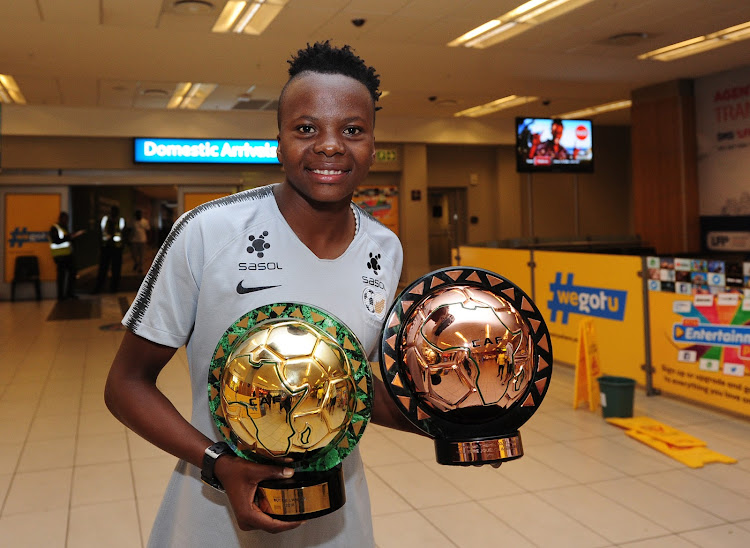 Banyana Banyana striker Thembi Kgatlana poses with her awards at the OR Tambo Airport on her return from Dakar in Senegal where she won the CAF African Women's Player of the Year as well as the African Goal of the Year on January 10 2019.
Image: Ryan Wilkisky/BackpagePix

Banyana’s Banyana’s new superstar Thembi Kgatlana’s mother‚ Constance‚ admits when her daughter started playing football she was a little mystified as to why.

Now‚ after 22-year-old Kgatlana top-scored at the Africa Women Cup of Nations (Afcon) in Ghana for runners-up Banyana last year‚ and won Women’s Player of the Year at the Caf Awards in Senegal this week‚ Constance Kgatlana can only say: “I’m very proud of my daughter. I feel great.”

Kgatlana‚ who also won Goal of the Year‚ competing against men and women players‚ was greeted by her beaming mom – sporting a shirt from Houston Dash‚ her daughter’s club in the USA – returning from OR Tambo International Airport.

“I was asking her‚ ‘Why football? Why not netball?’ But she said to me‚ ‘Mama‚ this one is going to be my talent’.

“She knew‚ even as a little girl. So I left her. And then I encouraged her.

“I was an athlete at school. So she gets it from me‚” Kgatlana’s mom laughed.

“Her father was a footballer and I was an athlete‚ a sprinter.”

Kgatlana’s father‚ Gabriel‚ travelled with her to Dakar.

He said there will be a party – no doubt a long-lasting one – for his daughter in their home town of Mohlakeng in Randfontein‚ soon after she returns from duty for Banyana in next week’s friendlies in Cape Town against Sweden and Netherlands.

Gabriel Kgatlana said Thembi was a good student at school.

“I saw her talent‚ and also off the field too. At school Thembi was wise‚ wise‚” he said.

“She was about eight years old when we saw her football talent. She would play with the boys in the street.

“After that there was a ladies’ club in Mohlakeng‚ Pama‚ which she joined and she started her career there.

“We always encouraged her as parents. When she was 13 the High Performance Centre [at Tuks] came to fetch her.

“She was 13‚ playing for the under-17s. After a year she was promoted to the under-20s. A year later she went to the national squad.

SA football superstar Thembi Kgatlana has the world at her feet

At 22‚ Thembi Kgatlana has the world at her feet following her Women’s Player of the Year and Goal of the Year prizes at the 2018 Caf Awards‚ says ...
Sport
3 years ago

Banyana on rise but can go further

It's inevitable that congratulatory messages are pouring in thick and fast from all quarters for Banyana Banyana's Thembi Kgatlana and Desiree Ellis.
Opinion
3 years ago
Next Article