Pule Ekstein ready to welcome George Lebese back at Chiefs 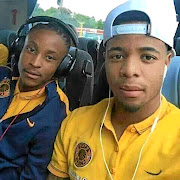 Lebese has been linked with a sensational return to Amokhosi following a dreadful year-and-a-half spell at Mamelodi Sundowns where he hasn't played a single minute this season.

There are signs that the reunion could happen due to both parties' flirtations on social media and the attendance of Lebese at some Chiefs games.

The Sundowns winger was in attendance at the Bidvest Stadium when Chiefs clinched a 2-0 win over Bidvest Wits in midweek which has further intensified the speculation.

"If he returns then we would welcome him.

"It would be good for him because he is not playing at his current club," Ekstein told Sowetan yesterday.

"I think he would be able to have a better chance in the team because we know he is a good player and know what he can do.

"He was a key player for us and would always score in crucial moments.

He was like an elder brother to me because he was in the team for a long time and I was sort of his junior."

Ekstein bagged the man-of-the-man award in the victory at Wits where he grabbed the second goal.

The 27-year-old will be looking to inspire his team to another positive result against Zesco United in the CAF Confederation Cup in Zambia on Sunday (3pm).