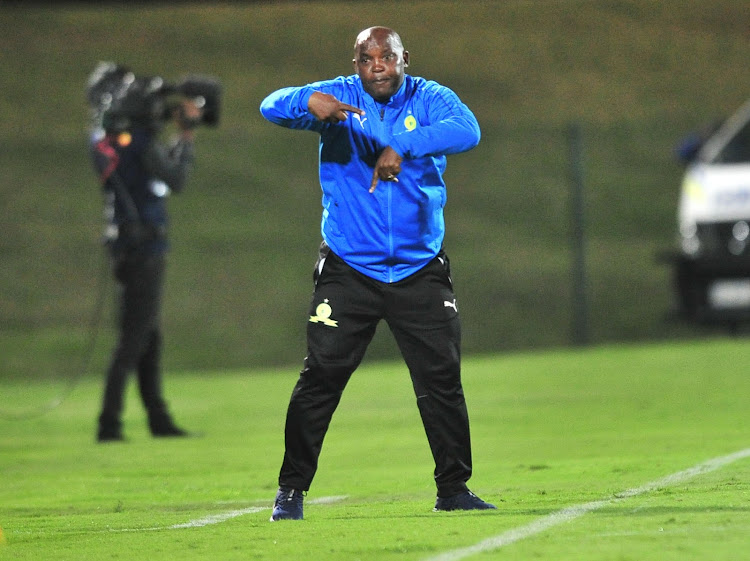 Mamelodi Sundowns coach Pitso Mosimane will be disappointed with the start his 2016 champions have had in their opening Caf Champions League campaign.
Image: Samuel Shivambu/BackpagePix

Lackluster Mamelodi Sundowns got their 2018/19 Caf Champions League Group A campaign off to a poor start when they let a lead slip to lose 2-1 to Lobi Stars of Nigeria at the Nnamdi Azikiwe Stadium in Enugu on Friday.

Sundowns led through Anthony Laffor, but goals in either half from Yaya Kone and Mathias Martins sealed the three points for the home side.

The South African side gave away possession far too easily and were second best to the loose ball for much of the match, out-muscled and out-thought by their opponents in a defeat that will be hard to take for coach Pitso Mosimane.

It immediately puts The Brazilians on the back-foot in a pool that also includes 2017 champions Wydad Casablanca and ASEC Mimosas of the Ivory Coast, who are in action later on Friday.

Mosimane chose a back three of Rivaldo Coetzee, Ricardo Nascimento and Mosa Lebusa, with Thapelo Morena and Lyle Lakay in the wing-back positions.

The front three comprised of Laffor, Lebohang Maboe and Gaston Sirino, with Tiyani Mabunda and Hlompho Kekana anchoring the midfield.

Laffor sprinted clear of the Stars defence inside the opening five minutes but with just home goalkeeper Olufemi Kayode to beat, the ball skipped away from him on the artificial surface and was cleared by the gloveman.

Sundowns were unfortunate again when Kayode made a superb stop from a Nascimento header following Sirino’s corner, with the ball looping up and dropping onto the crossbar and out.

The visitors then blew a three-on-one chance when Laffor drifted offside as he sought to link with Maboe in what ended up being a wasteful piece of play.

Sundowns looked by far the more penetrative side in the first half, and it was no surprise when they hit the front on 37 minutes.

Their ability to pick apart the Stars defence was a feature of the first stanza as Sirino was played into space and his cut-back was turned home by Laffor.

Maboe missed a glorious chance to make it 2-0 just before halftime when he again beat the offside trap, but faced just with Kayode, put his shot well wide.

Stars had the chance to level the scores shortly afterwards when Nascimento hauled down Sunday Adetunji in the box and referee Gehad Grisha from Egypt pointed to the spot for what looked a fair award.

Kone sent Sundowns goalkeeper Kennedy Mweene the wrong way from the spot and easily buried his shot into the bottom corner to send the home side into the break level.

Mweene had to make a smart save to deny Adetunji’s header early in the second period, and shortly afterwards frustrating the forward again from a rasping shot.

Sundowns were fortunate when Mweene pushed a long-range shot onto the post and although the rebound was turned home, the offside flag was raised.

But they did fall behind seconds later as poor, hesitant defending saw them fail to clear the ball and Martins crashed the loose ball home.

Mosimane threw on an extra attacker when he withdrew Coetzee and replaced him with Phakamani Mahlambi, and the latter set up a chance for Laffor that the Liberian miscued.

Sundowns had the majority of the possession in the closing stages, but created little in front of goal and have much work to do if they are to be considered contenders for this year’s crown.

Bidvest Wits have signed Phathutshedzo Nange from Blacks Leopards to register a fourth signing in the opening 10 days of the transfer window.
Sport
3 years ago

SA Football Association (Safa) acting chief executive Russell Paul says the body will now throw its weight behind Bafana Bafana getting the draw they ...
Sport
3 years ago
Next Article