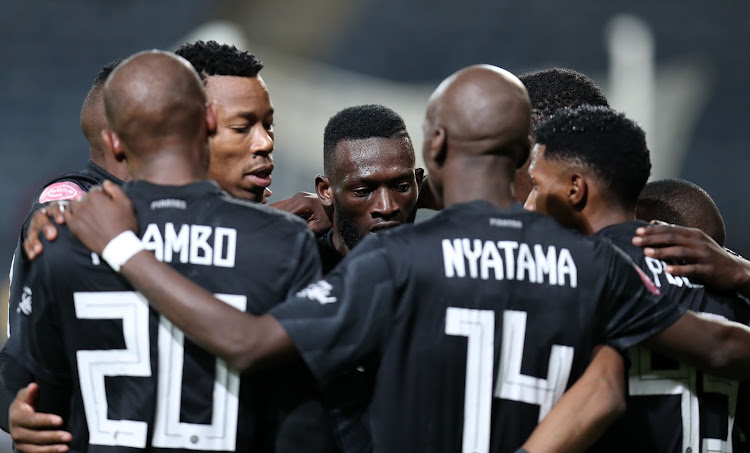 Vincent Pule of Orlando Pirates celebrates with teammates during the Absa Premiership 2018/19 match between Orlando Pirates and Chippa United at the Orlando Stadium, Soweto on 08 January 2019 ©
Image: Muzi Ntombela/BackpagePix

Orlando Pirates might have scored four goals on Tuesday and moved to within two points of the top of the Absa Premiership table but Milutin Sredojevich said the Bucs were still below par in their victory over Chippa United.

Pirates won 4-2 in a rain-soaked game at Orlando Stadium with two own goals‚ a penalty and several controversial refereeing calls that might well have gone the way of the struggling Port Elizabeth-based club.

“I don’t believe the result was a reflection of what happened out there on the field … the result is much better than our performance‚” said the coach.

“We need to look at ourselves and we have three days to fix things before we go to Bulawayo‚” he added of the opening African Champions League Group B game against FC Platinum of Zimbabwe on Saturday.

“In the last two games we have scored six goals‚ which is a good standard‚ but at the same time‚ we have to be aware that conceding four goals is something that is below any standard.

“This is a concern that we need to address.

"We want to have clean sheets but we are having a problem and we are not running away from that reality. We will look to address it.”

The Pirates coach suggested there was an element of lethargy about their showing because of the Xmas break and also Saturday’s 2-2 high intensity draw away at Highlands Park in Tembisa.

“We didn’t have a lot of time since our last game against Highlands where we also had slippery conditions and it took a lot out of the players.

“Matches like these ones are the hardest because you know you are expected to get the three points but subconsciously you underrate the opponent and put yourself on the back foot‚” said Sredojevich.

“We had a good start with an early goal but we dropped back after that and it caused us to conceded an equalising goal. We went back to a high gear after that and were leading at half-time.

“We agreed at the break we would defend by possessing the ball and we would close the gaps between the lines.

"We also wanted to be more effective going forward and once we got the third goal‚ we thought that we would be able to finish the game off in a peaceful way but we conceded a set piece‚ scored an own goal and lost our heads.

"We were shaky after that but our we brought two subs who secured the result for us.”