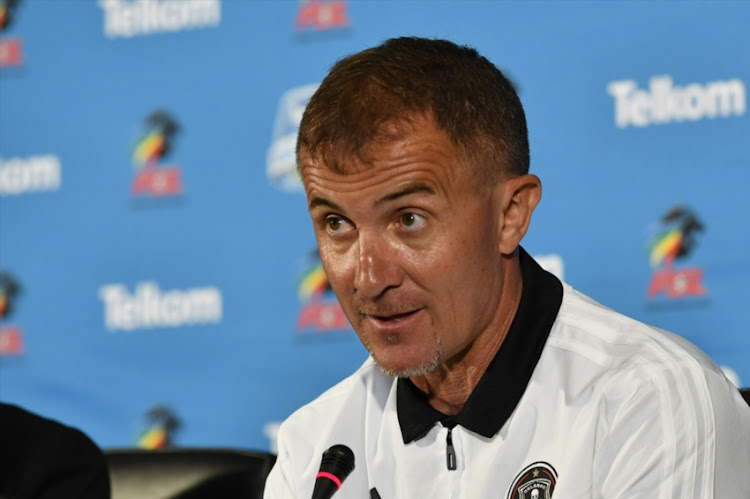 Orlando Pirates coach Milutin Sredojevic has said he believes the club need to sign strategically‚ and not extensively‚ in the January transfer window.

The Buccaneers returned from the Absa Premiership Christmas break with a 2-2 draw against Highlands Park in Tembisa on Saturday night that left them five points behind leaders Bidvest Wits in second place.

Pirates are pushing hard for a first league title since the second of their famous back-to-back trebles in 2011-12.

A potential stumbling block is that they have an already somewhat bloated 36-man squad for the coaching staff to manage.

And it is a squad that does not necessarily have the right balance in all areas. For instance‚ five players have filled the right-back role this season.

Sredojevic was reluctant after the Highlands draw to disclose whether‚ or for which areas of their squad‚ Pirates would delve into the transfer market in January.

“This is something that I will not talk on. I would rather focus on our match against Chippa United [on Tuesday night]‚” the coach responded.

“Our management has the reports‚ they know‚ and they are doing work behind the scenes. And this is something that will be communicated in due course.”

Pressed further‚ though‚ it was put to Sredojevic that with the quality‚ and numbers‚ of players he has sitting in the stands already‚ making numerous signings might run the risk of destabilising his squad.

“You know the core of the team that we have. And when you have that bone‚ and family atmosphere and whatever you cannot now come and risk with anything special in this half-season transfer window‚” the coach responded.

“[In this window] you are really going for something that is really urgently needed.

“Other than that you already have a formed team‚ because the team has been formed in June and July.”

Pirates already have centreback Alfred Ndengane‚ signed after being released by Bloemfontein Celtic last year‚ who they have registered this month.

He adds strength to a problematic defence that has conceded 16 goals – far too many by the halfway stage for a team considering themselves championship material.

Bucs might also look at goalkeeper‚ where they have struggled for a number of seasons for a solid performer.

The Soweto giants also seem likely to loan out some players who have struggled for game time‚ though Pirates do also have their participation in the Caf Champions League group stages from this month to consider.