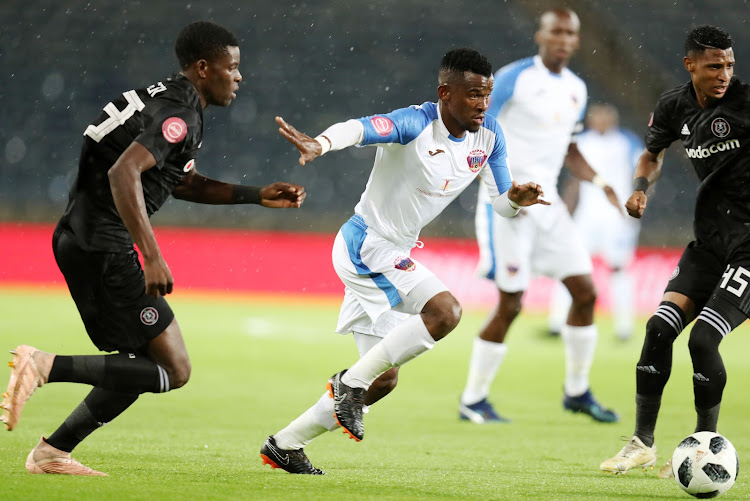 Kudakwashe Mahachi fired Orlando Pirates to a pulsating 4-2 victory over relegation-threatened Chippa United to cut Bidvest Wits's lead at the top of the Absa Premier League to two points at Orlando Stadium on a wet Tuesday night.

It will be a confidence booster for the Buccaneers, as they head to Zimbabwe this weekend for the African Champions League group game against FC Platinum n Bulawayo.

The rain soaked pitch was slippery and made for a difficult encounter but the gulf in class was all too apparent with Pirates scoring early although in the end they had to work hard for their points.

Happy Jele had the easiest of goals after just three minutes as Thembinkosi Lorch floated in a freekick and then captain found himself unmarked in between the Chippa defenders and simply headed the ball goalward to ensure the perfect start.

Lorch’s running down the right hand side was the undoing of Chippa on several occasions as Pirates also dominated the midfield and were strongest in the tackle.

But then suddenly it all changed with a rare Chippa attack in the 23rd minute. Mark Mayambela, on the edge of the Pirates’ box, was looking to play in Tebogo Tlolane but over hit his pass, only for the attempted clearance to be botched by Jele and allow Tlolane to nick in and steal the loose ball before tucking away the equaliser.

It was somewhat against the run of play but suddenly promised a little more of a contest.

But then Phetso Maphanga headed his back pass goalward and watched in horror as goalkeeper Daniel Akpeyi slipped and the ball trickled over the line to restore the Pirates lead.

Maphanga, who been skinned on the right hand side of the Chippa defence repeatedly by Lorch, was then taken off after 36 minutes in what will be a further blow to his confidence, just weeks after rejoining the club after 12 months with the Buccaneers.

Pirates then got another fortuitous goal 11 minutes into the second half as Gerald Modisane stumbled over an attempted clearance on the edge of his box and allowed the ball to bounce to Vincent Pule, who then got tripped by Modisane as he tried to go past him. Pule tucked away the resultant spot kick to make it 3-1.

But Chippa were right back in the game through another own goal. A corner kick hit Innocent Maela on the chest and it fell into his own goal to add to the bizarre list of events.

Chippa should have been level at 3-3 soon after as Rhulani Manzini hit the upright sand then Chippa were denied a clear penalty when Pirates debutant Alfred Ndengane handled in his area.

But Mahachi came on to seal the match with a strong finish from close range for his second game in as many matches with some eight minutes remaining.