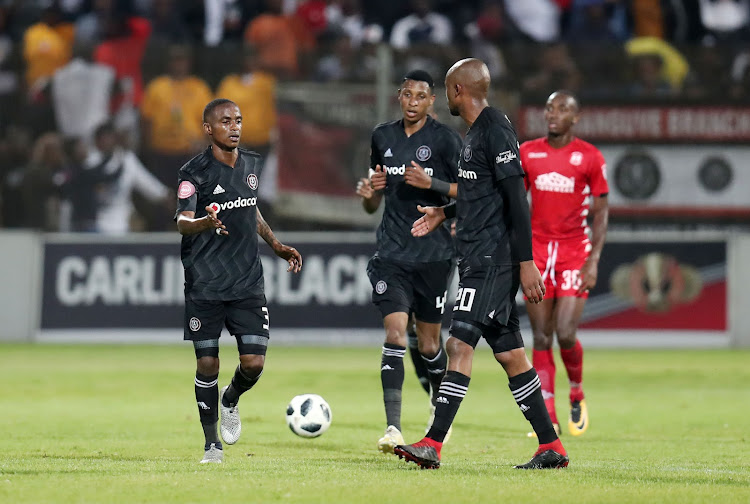 Thembinkosi Lorch of Orlando Pirates celebrates goal with teammates during the Absa Premiership 2018/19 match between Highlands Park and Orlando Pirates at the Makhulong Stadium, Tembisa on 08 January 2019.
Image: ©Muzi Ntombela/BackpagePix

Orlando Pirates are more concerned with themselves‚ with ironing out their own flaws and striving for perfection to achieve results‚ than log standings‚ coach of the current second-placed team in the Absa Premiership Milutin Sredojevic has said.

The Buccaneers‚ who host Chippa United at Orlando Stadium on Tuesday night‚ went from three points behind leaders Bidvest Wits to five on their return from the Christmas break.

Pirates fought back from a goal down twice to earn a thrilling 2-2 draw against Highlands Park at Makhulong Stadium on Saturday‚ when the Clever Boys beat Free State Stars 2-1 away.

The season is only at just past halfway‚ and there are a lot of points to play for.

But the three-quarter stage of the league is where sides not in 100 percent form can drop off the pace‚ and teams in rhythm can to begin to establish crippling leads.

Sredojevic was asked if Pirates were concerned about the five-point gap from Wits.

“Because we played against Highlands like it was a final. And every match we shall play like this‚ and we shall see what football will pay us back.

“The main lesson we learned against Highlands was that we need to close the gates behind and we need to keep being effective up-front. And this is exactly what our target is.

“We will take each match as it comes – 14 matches as cup finals.

“And we will try to play the usual formation until things go. If they don’t go‚ we shall employ total risk until all chances die‚ knowing that we have thrown everything that we have available at trying to win the game.”

Chippa have been making their usual self-inflicted mess of their season.

On their third coach already in Joel Masutha after Dan Malesela and Eric Tinkler came and went‚ the Eastern Cape club are floundering in 15th place after returning from the break with a 1-0 home defeat against Bloemfontein Celtic on Friday night.