Foul on goalkeeper robs Highlands of win over Bucs 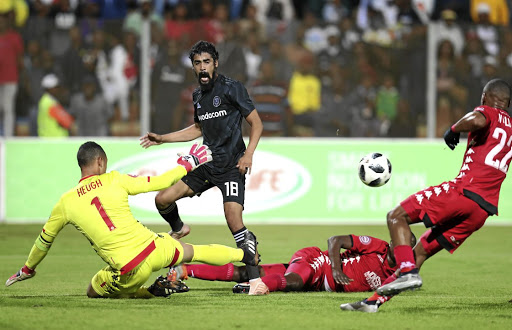 A nail-biting, fast-paced and engrossing Absa Premiership second fixture meeting between Highlands Park and Orlando Pirates at Makhulong Stadium in Tembisa was spoiled by what looked like a foul against the home side's goalkeeper, Marlon Heugh.

As a result, the Lions of the North ended up sharing the spoils with the Buccaneers, despite looking good for all maximum points.

The crowd of nearly 9,000 left the stadium with mixed feelings.

Some sympathised with the match officials, while others felt referee Thando Ndzandzeka was the closest when a cluster of players from both sides interfered with Heugh as he tried to make a save.

But emotions were contained and even die-hard Highlands followers agreed it could have been human error as Ndzandzeka had handled the game so well for the better part of the match.

From the assumed foul, Pirates late substitute Kudakwashe Mahachi made an immediate impact when he guided the ball inside the net. This was seven minutes after he had replaced Justin Shonga in the 75th minute.

His goal denied Highlands three points and instead helped Bucs walk away with a point. The final score was 2-2.

Orlando Pirates are more concerned with themselves‚ with ironing out their own flaws and striving for perfection to achieve results‚ than log ...
Sport
3 years ago

One of Highlands's three directors, Sinky Mnisi, was smiling from ear to ear although he touched on the assumed foul on Heugh.

Overall, Mnisi was satisfied with the manner in which his "red ants" conducted themselves in their backyard in front of a big crowd.

"I meant what I said that they must bring their best squad. We mean business.

"It looked like my keeper was prevented from perfuming his duties, but it's okay," he said.

The hosts took the lead twice via Sphiwe Mahlangu and Peter Shalulile, with Pirates levelling matters through Thembinkosi Lorch and Mahachi.

Light rain fell over stadium after the arrival of Pirates just after 7pm, an hour before kickoff. The Bucs took a stroll inside the pitch and interestingly, one of their "men" sprinkled water from a plastic container as they moved from post to post.

He ended by emptying the container at the goalposts where Heugh was later impeded. Whether it was just mind games or the real stuff, this seems to have had an effect on Ndzandzeka.