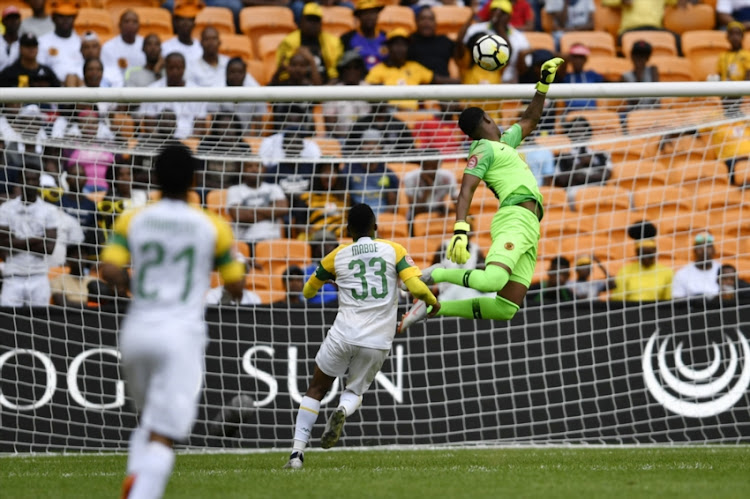 A horror goalkeeping error late in the game handed champions Mamelodi Sundowns a fortunate away 2-1 win on Saturday's Premier Soccer League clash against Kaizer Chiefs at Soccer City and a chance to climb up the table.

Virgil Vries misjudged a long cross towards him, saw it bounce over his head and watched in horror as a grateful Lebogang Maboe smashed it into an empty net for a fortunate, and bizzare, winner.

Lyle Lakay floated the ball forward into the Chiefs box but as Vries came out to collect it, he misjudged the ball, saw it go over his head and Maboe followed up to ensure all three points.

It was tough on Chiefs, who lost their first game since their managerial change last month, as they really were the better team but got nothing out of it in the end. It took only three minutes for Chiefs to be breached for the first time since coach Ernst Middendorp took over as Anthony Laffor produced a moment of magic in his first league outing of the season.

He started the build-up with a cut inside off the right flank, playing a one-two with Gaston Sirino, then popping the ball over Willard Katsande and beating a static Vries to the ball again to score a goal of some quality.

Laffor has always been an enigmatic character, capable of moment s of genius but seemingly oftentimes wedded to the treatment table than on the pitch.

Sundowns’ supporters will be hoping he is now set for a decent run in their line-up as he could well prove an important component for them in their bid to retain their title.

But Pitso Mosimane has more pressing concerns, notably at the back as his defence looked poor, particularly at set pieces.

Chiefs scored the equaliser in the 14th minute after Pule Ekstein won a freekick on the right hand side. Khama Billiat whipped in the setpiece, Jeremy Brockie got a deflecting touch in a botched attempt to clear and it went all the way through to an unmarked Katsande at the back post.

The Chiefs skipper still need to react quickly, stooping down to get his head to the ball and squeeze it past Kennedy Mweene.

The marking was non-existent and it was again the case 10 minutes later from a corner which fell for Katsande on the penalty sport but he blasted wildly over the top when he had a good chance to nab a second and put Chiefs ahead.

Sundowns were stretched by Chiefs’ wing play and did not have an answer for the enterprise of Ekstein and Lebogang Manyama on the edge of the area.

But they did take advantage of Chiefs failing to get back when a ball over the top found Lebogang Maboe clear in the 19th minute and allowed him away at goal. He should have set up Brockie but his pass was poor although Laffor did pick up the loose ball and fired at goal, only to have is effort blocked by the Chiefs centre backs.

Middendorp made two changes at the break which seemed hard on Ekstein and Godfrey Walusimbi but Bernard Parker very quickly made an impact, going close with a 49th minute header and again in the 68th minute.

Chiefs dominated the first 15 minutes of the second half without anything to show for it, with George Maluleka bossing the midfield but lost Katsande to a hamstring injury with 20 minutes left.