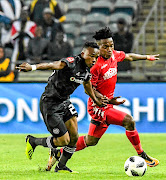 Orlando Pirates must bring their best squad to Makhulong Stadium in Tembisa where they will face the wrath of the red ants tomorrow night, warns one of Highlands Park's directors, Sinky Mnisi.

Mnisi's Lions of the North - though he calls them the red ants, after the private security company specialising in clearing illegal invaders, because of their red jersey - will clash against the Buccaneers.

Placed eighth on the Premier Soccer League table, Highlands Park drew 1-1 with Pirates, who are second, at Orlando Stadium earlier this season.

Pirates have lost only two of their 15 matches and Highlands have suffered three defeats from the same number of matches.

"They will meet a completely different team compared to the one that shared spoils with us in August," warned Mnisi.

"The red ants are itching to sting. What do you expect when you invade the ants' house of pain and suffering?"

Mnisi expects a fierce battle because the Sea Robbers are eying the No 1 spot that is occupied by Bidvest Wits, who enjoy a three-point lead halfway into the season.

"They will go back knowing and fully understanding what it takes to raid the ants underground," continued Mnisi, who confirmed that the PSL's top goalscorer, Mothobi Mvala, who leads the pack with seven goals, is out due to a one-match suspension.

Mnisi said he hoped that at the end of the game no one will complain about the pitch like sacked Kaizer Chiefs coach Giovanni Solinas did after a goalless draw between the two sides in October.

He added: "I drew with Pirates in August and it actually was not the first time we drew with them.

"It is about time that the score is settled between us. One must die this time."

The supporters of both clubs are requested to be at the stadium on time to avoid the pushing and shoving.