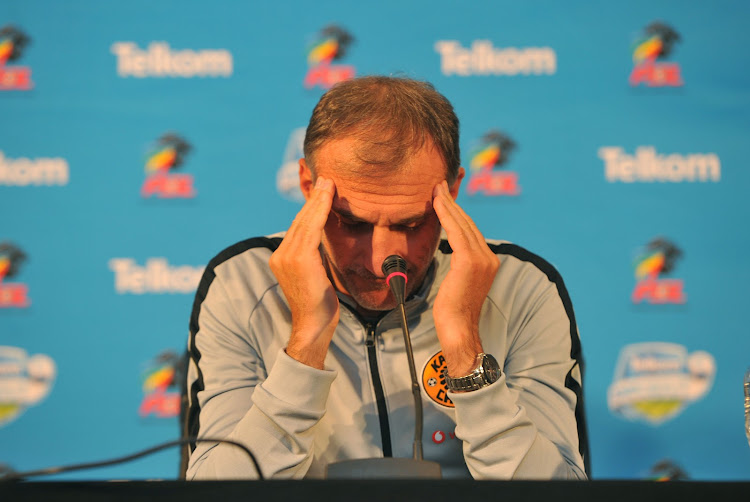 Kaizer Chiefs coach Giovanni Solinas is sweating to have all his regular players available for selection for the Soweto derby against sworn enemies Orlando Pirates at FNB Stadium on Saturday October 27, 2018.
Image: Sydney Mahlangu/BackpagePix

We had such a blast at some of the press conferences and media interviews we did during year that it would have been remiss of us not share the pearls of wisdom we got from the soccer personalities and administrators in 2018.

This is what they said and this is straight from their mouths:

“I know when I read a little piece in The Sunday Times that says Stuart Baxter is earning R12-million a year and he doesn’t do a lot for his work‚ I know that is trying to get people in Soweto and Alexandra to look and think this is to enrich a coach that doesn’t do a s..t-all lot of work. I understand how the media works. I understand who’s that [the writers] and what that [story] is aimed at.” — Bafana coach Stuart Baxter weighing in on the debate about his salary and describing reports suggesting that he earns R1-million a month as national team boss as “absolute fantasy”. Sunday Times would later reveal that he actually earns R490‚000 a month‚ less than predecessors Ephraim ‘‘Shakes” Mashaba and Pitso Mosimane.

“And also administration … the culture and identity of Chiefs is such that we are very peaceful‚ the culture and identity of Chiefs is such that they are cordial. They are more rational than emotional. Now would one want to see a scenario where this persists? No‚ no‚ no. It’s not right. We faced this [violence] in Johannesburg and now in Durban and we playing again in Durban on Tuesday against Arrows. If it means I have to bring the calmness‚ listen to have to do that. Be responsible enough and say it‚ protect the players‚ protect administration‚ set an example and a trend that this must stop. If it has to stop by me being just outside the scenario‚ even with two matches to go‚ do it. There is nothing wrong with that.” — Steve Komphela quitting Kaizer Chiefs after a violence-marred match against Free State Stars in April.

“One big mistake is that when I lie down and then you accept that you must dust your feet‚ it’s not that I’m a carpet‚ but I must [show] humility. It is not that I’m stupid. So‚ Luc Eymael‚ these are mercenaries. You can see the profile of this guy. He comes to Polokwane City‚ he doesn’t complete a contract. Lack of courtesy and professionalism. He goes to Bloemfontein Celtic and all that. Now listen to what he says. I have never seen a human being think like this. Not unless this guy thinks very little of us as a society. He says he is giving Chiefs and SuperSport United a week to respond to him. If they come in a week‚ then he’s not going to go back there [to Stars]. My man‚ how do say such? Even in the press conference he was not even aware that he was busy insulting his current employers. Besides insulting the current employer‚ he’s insulting the next potential employer.” — Komphela lashing back at Belgian coach Luc Eymael in their long-running battle.

“I want to thank especially the chairman (Kaizer Motaung) for the opportunity they have given me. This is a great club with a great history ...... I always wanted to play for this team. After being named man of the match in this great club I’m now looking forward to the future.” — Khama Billiat after scoring for new club Chiefs but still ending up on the losing side against Mamelodi Sundowns in a pre-season tournament in July.

‘‘Huh‚ Khama Billiat. Guys - Barcelona play with 10 players plus [Lionel] Messi. At Kaizer Chiefs we play with 10 players plus Billiat. Billiat is the best player in the PSL. He's a top-class player. In my opinion. Maybe someone will disagree‚ but in my personal opinion he's an unbelievable player‚ a fantastic player. He's a player who makes the difference. He's not a player for the PSL — sorry guys. But this player is for Europe.” — seemingly lovestruck erstwhile Chiefs coach Giovanni Solinas declaring his affections for Billiat.

“It’s not as if I’ve run out and roped my son the second he’s landed in this country. He’s been working with Chiefs and with SuperSport. And people maybe always will have opinions. And they don’t always have to be well-founded. Never let the truth get in the way of a good moan. I don’t expect it to be a decision that is attacked by the people who understand football. But does that mean it won’t be attacked by certain people — well‚ it may do. But I’ll be massively disappointed and surprised if people don’t see it for what it actually is. It’s the best decision in a very difficult situation.” — Baxter after the decision to rope in his son‚ Lee Baxter‚ as Bafana goalkeeper-coach for the Africa Cup of Nations qualifier against Libya in September was greeted by a massive backlash.

‘‘Honestly‚ without sounding biased to probably my allegiance to Steve‚ but I think having lost Steve Komphela is in my opinion a big loss for Chiefs from a technical perspective. ‘‘The type of leader that he is‚ the tactical acumen that he possesses‚ I think in that regard I think if you compare the previous team to this team and from an organisational perspective‚ you can clearly see the lack of a coach of that calibre. Without taking anything away from the current head coach (Giovanni Solinas)‚ but I do think that in Steve Komphela you can see with regards to how they played last season and how they play this season.” — Orlando Pirates assistant coach Rulani Mokwena spicing things up ahead of the Soweto Derby in October and suggesting that rivals Kaizer Chiefs miss former coach Steve Komphela’s football smarts.

“My supporter comes [onto the field] and wants to give me a gift and somebody bumps [stops] him‚ and I lose the plot. I get called by the DC [disciplinary committee] – ‘assault’. Against Barcelona [in a friendly in May] the guy came in and I hugged him and ushered him out. So that’s what happened in Durban‚ not assault. I received a letter within five days. But there were people burning the stadium‚ how long did it [the investigation] take? Me‚ five days.” — Sundowns coach Pitso Mosimane after a case of common assault was opened against him following an incident at the end of his club’s 3-3 draw with AmaZulu in uMlazi in October.

“I believe it is only appropriate that I address how my previous tweet‚ which I have since deleted‚ and some of the comments were received. It is important that I mentioned that at that moment‚ my comments were merely meant to show support‚ not only towards coach Rulani‚ but moreover towards a club I grew up supporting‚ and wanted to share my excitement in their recent results. But I do understand why they were misinterpreted and would like to assure you that that was not my intention. I would like to apologise to all those who found them offensive.” — Bongani Zungu apologising for comments he made on Twitter suggesting that assistant coach Rulani Mokwena was the real brains behind the current coaching staff of Orlando Pirates.

“They have a very good goalkeeper who deserves the man-of-the-match award for playing and also for killing time. He did that so many times against Pirates. How can you limp the whole game and when it comes to penalties you dive without limping? He is a good goalkeeper and there is no doubt he deserves the man-of-the-match award that he got. But when somebody does that‚ how do you crown him as the best player of the match? “Where is fair play? I am not happy with that and there is a goalkeeper in SA who also does that.” — an incensed Mamelodi Sundowns coach Pitso Mosimane firing a salvo at Baroka FC goalkeeper Elvis Chipezeze and accusing the player of killing time during an Absa Premiership match that stuttered to a goalless draw at the Lucas Moripe Stadium in Atteridgeville early in December.

“When I took the job I told myself that even if people are saying that he (Chippa Mpengesi) will fire me‚ I believe that I will fire him! That is the attitude that is going to carry me through. You can’t be a coach if you are going to be a coward.” — Chippa coach Joel Masutha after his appointment in a reference to notoriously trigger happy boss Siviwe Mpengesi‚ who is on his third coach this season after seeing off Dan Malesela and Eric Tinkler.

“Coming into the country like it happened in 2005/2006‚ not really knowing the environment‚ not really knowing the players‚ and taking over a team of this size and this brand‚ you discover something new every day. I believe with the movement in the last few years of more than a decade‚ I have this background information. I never stopped observing the league‚ the PSL‚ every time I was here. I always go to the stadium‚ it doesn’t matter which stadium and which team‚ it’s another background now. The background is definitely very important.” — New Kaizer Chiefs coach Ernst Middendorp proclaiming in December that he’s learnt some important life lesson after his incident-riddled first spell at Naturena and intends to do things differently this time.

‘‘We expect negativity and this puts us properly in line with what we want to achieve. We do expect that even if I bring [Jose] Mourinho I will get negativity‚ even if I bring Sir Alex Ferguson they will say he is old‚ he’s this and he is that. There would be criticism everywhere. So we welcome all the negativity and like the coach [Middendorp] says‚ the results will show.” — Chiefs football manager Bobby Motaung after Middendorp’s shock return.