A day of letting rip‚ except Elgar

Reports have emerged of disquiet in the Pakistan camp after the visitors’ coach Mickey Arthur apparently gave his senior batsmen a severe dressing down after day two of the first Test against South Africa.

Arthur would have had reason to vent as Pakistan lost nine wickets after tea on the second day as they relinquished a position of relative promise to leave South Africa a less than daunting target of 149.

According to one report published in Pakistan‚ Arthur in a ‘fit of anger’ somehow found the time to hurl profanities‚ throw equipment‚ bang walls and slam doors.

The order in which all that occurred isn’t clear.

The Pakistan Cricket Board (PCB) has since pushed back saying in a statement the post stumps debriefing happened in a cordial atmosphere.

On Friday‚ however‚ Arthur was clearly incensed by third umpire Joel Wilson overturning an on-field‚ or soft decision‚ which deemed that Dean Elgar was caught in the slips by Azhar Ali.

In real time the catch looks completely legitimate but upon closer inspection the ball also seems to touch the turf as Ali’s fingers wraps around it.

Pakistan had reason to feel aggrieved as similar attempts have routinely been deemed good enough for a dismissal.

That incident led to wider complication on Friday as South Africa went on to win by six wickets.

Elgar’s frequent inability to find the middle of the bat had unintended consequences.

Former Test captain and now commentator Shaun Pollock was part of lunch time chat in which the events which led to Elgar’s reprieve were re-enacted.

Unfortunately for Pollock his grey trousers catastrophically split which made for a far more revealing analysis of the post morning session. 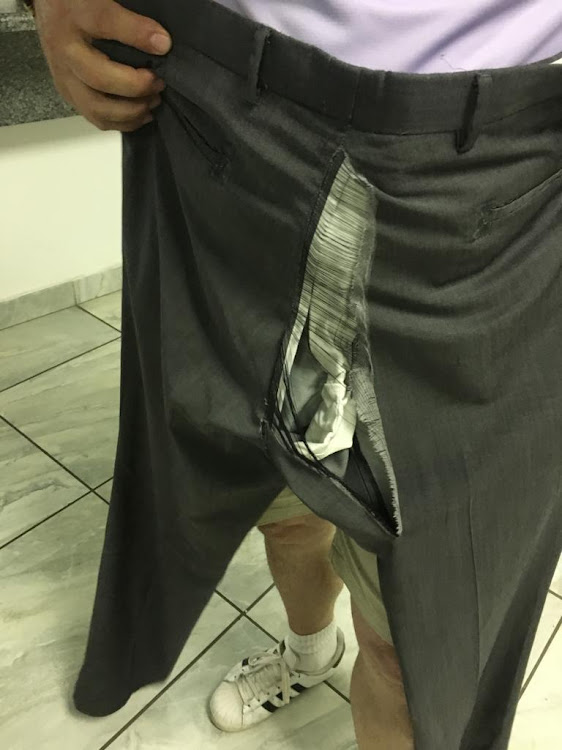 Former Test captain and SuperSport commentator Shaun Pollock ripped his pants while re-enacting events of earlier in the day at Centurion on Friday. This is what remained of it. He meanwhile, slipped into tracksuit pants.
Image: Liam Del Carme

You could argue that had Elgar ‘middled’ it‚ ‘Polly’ would still have his pants.

Then again‚ few makes batting look more like purgatory than Elgar. He finds ways of putting his body in the path of the ball and it is easy to arrive at the conclusion that had he been part of the Infamous Bodyline series‚ his average may well have remained in rude health.

The upshot of all of this is that the team physiotherapist spent more time on the field on Friday than Elgar’s opening partner Aiden Markram‚ or indeed captain Faf du Plessis. Incidentally‚ both captains bagged a pair here‚ the first time that happened in Test history.

Elgar meanwhile‚ occupied the crease with the unease of a day tripper to Clifton’s 4th beach.

Even after dead batting the ball his attempt to flick or nudge it to the nearest fielder is done with imprecision. At times it seems‚ he uses the bat as you’d expect the Queen to use a broom.

Above all however‚ Elgar is a survivor. He takes the body blows‚ bobs and weaves and before you know it 12 rounds go by and he gets a split decision. He is dogged and his terrier-like instincts have served him and the team well.

He laboured to 40 on Friday before changing his bat. When he next met the ball (with the bat) ‘clunk’ was replaced by ‘thud’ as he hit over mid on and then down the ground to bring up his 13th Test 50.

Almost as if scripted from his playbook‚ he duly nicked the next one to the keeper.