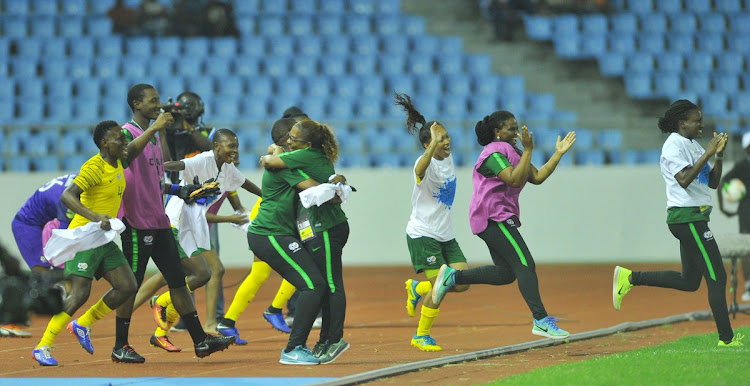 The South African women’s side can point to their best ever year of international competition in 2018 as they buried some long-held demons and showed that they are a team very much on the up with the potential to grow even further in the coming years.

A first ever qualification for the Fifa Women’s World Cup was the notable achievement by far, but there were also other smaller successes to celebrate, both for the team and the individual careers of the players.

The year started on a positive note when Banyana Banyana hosted Sweden in an international friendly and although they lost 3-0 to one of the world’s elite sides at the Cape Town Stadium, showed enough in the game to suggest they could hurt much more accomplished outfits.

It was announced soon afterwards that the duo of Thembi Kgatlana and Linda Motlhalo would join Janine van Wyk at the Houston Dash in the National Women’s Soccer League in the United States, for many the premier domestic women’s competition in the world.

There they would work with former Banyana coach Vera Pauw, and became instant regulars with the side, though Kgatlana was used mostly off the bench.

Regular action in such a tough competition certainly refined the qualities of all three players and it would certainly have a bearing on national team success later in the year.

Coach Desiree Ellis’ side entered the annual Cyprus Women’s Cup in February and March as the lowest ranked team, but after 0-0 draws with Slovakia and North Korea, and a 1-0 win over Hungary, finished second in their group.

They were beaten to fifth place by Belgium though, despite taking the lead through the evergreen Noko Matlou.

With Leandra Smeda playing in the Uefa Women’s Champions League at Lithuanian side Gintra Universitetas, Ode Fulutudilu at Finland side ONS and a host of players on the US College scene, there was more good news when it was announced that Refiloe Jane and Rhoda Mulaudzi had signed for Australian side Canberra United, adding to Banyana’s overseas contingent.

The side entered the regional Cosafa Women’s Championship in September among a strong field that included fellow World Cup qualifiers Cameroon, and tough teams from Zimbabwe and Zambia.

The competition in Port Elizabeth proved a huge success, not only for the football on the pitch but the strong support in the stands that showed that the appetite for women’s football in the country is strong.

Banyana won through to a final against Cameroon and came through an epic encounter 2-1 with Jane the star of the show, a result that gave them plenty of confidence heading into the African Women’s Championship in Ghana a month later.

The team had further warm-ups with a trip to Chile where they met their hosts in two fixtures, losing 1-0 with 10 players in the first and drawing the second 2-2, satisfactory results away from home against a team ranked well above them on the Fifa list.

There the African Women’s Championship off to the best possible start with a 1-0 victory over Nigeria, just the second time in 25 years of trying that South Africa had beaten their great West African nemesis.

They followed that up with a crushing 7-1 victory over a desperately poor Equatorial Guinea side that conceded 18 goals in their three games, and a less impressive 1-1 stalemate with Zambia to book a place in the semi-finals.

There they faced Mali in the knowledge that a win would send them to the World Cup in France, and it proved comfortable on the night, with a 2-0 success.

A penalty shoot-out defeat at the hands of Nigeria following a 0-0 draw saw the side disappointingly lose out on a first ever continental title, but for Ellis and company it was job done with the World Cup place secured.

Banyana were easily the best side in the competition in terms of technical quality and tactical acumen, they only attribute where they were at times second best was in physicality.

Kgatlana, who had grown so much as a footballer in her time at Dash, picked up the Golden Boot with five goals and was also named the Player of the Tournament.

She is surely a shoe-in for Caf Player of the Year for 2018 when they announce the award winners next month, which will be a sweet moment having missed out on the prize in 2017.

Kgatlana was also named the best player at the Cyprus Cup to cap a huge year for the 22-year-old.

There has been unprecedented interest in the women’s national side, with everyone from ordinary fans in the street to President Cyril Ramaphosa offering congratulations on their achievement, and it is against this backdrop that they will hope to improve further in 2019.

It will be another tough years with a return to the Cyprus Cup, the World Cup in France and the defence of their Cosafa crown, and for many in the squad this is also likely to be a swansong 12 months after which they will hang up their boots.