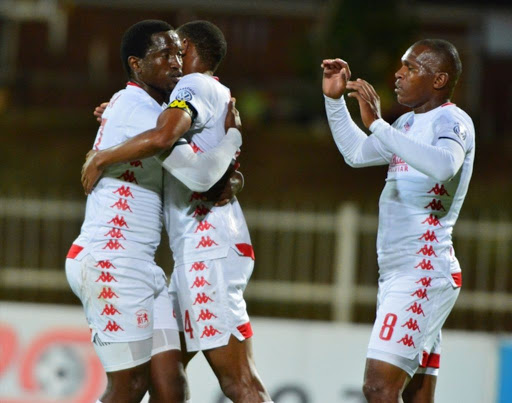 Mothobi Mvala of Highlands Park celebrates goal with team mates during the Absa Premiership match between Polokwane City and Highlands Park at Peter Mokaba Stadium on December 11 2018 in Polokwane. Mvala has moved up to the top of the league’s goalscoring charts.
Image: Philip Maeta/Gallo Images

Mothobi Mvala raced away from his rivals on the Premiership scorers' chart as he scored his seventh league goal to help Highlands Park hold SuperSport United to a 1-1 draw at Makhulong Stadium on Sunday afternoon.

The lanky midfielder headed the in-form Lions of the North level immediately after the restart to cancel out Maphosa Modiba’s opener on the stroke of half time in the last match played before the Christmas break in the East Rand township of Tembisa.

Mvala‚ one of South Africa’s shining stars for the Under-23s at the 2016 Rio Olympics‚ opened a two-goal gap between himself and nearest rival Tshegofatso Mabaso of Bloemfontein Celtic.

The point caps what has turned out to be a memorable campaign for Highlands who have just returned to the top-flight following their relegation in the 2016/17 season and takes them into eighth spot on the log with 20 points at the halfway mark.

Highlands have now claimed 8 points out of a possible 12 while for three-time champions SuperSport‚ the draw moved them into third position and a point above cross-town rivals and champions Mamelodi Sundowns with 23 points from 15 matches.

Highlands coach Owen da Gama has been modest when he talks about how his team has fared in their return to the top-flight and repeatedly said his team is still settling in in the Absa Premiership.

But with an impressive 20 points won at the halfway point‚ Da Gama’s team will surely start to believe they can achieve something come the end of the season.

They have not lost against the big guns Orlando Pirates (1-1)‚ Kaizer Chiefs (0-0) and Mamelodi Sundowns (0-0) and beat Cape Town City 2-0. Highlands have lost only one of their six home matches so far.

The match started on a rather pedestrian pace with both sides failing to penetrate each other in the opening stages.

The home side finally got their groove midway through and started to ask questions of their visitors’ defence with Mvala pulling the strings from midfield.

Against the run of play though‚ Highlands found themselves a goal down and on the back foot after sloppy defensive work allowed Modiba to poke home his fourth league goal of the season.

The second half was delayed for over half an hour as a passing thunderstorm saw the players not returning for the resumption of the match.

The action did‚ however‚ get underway and Mvala wasted just a minute into the second half to level the scoring.

Highlands coach rang the changes in a bid to grab the late winner and brought on an exciting winger in Mokete Mogaila.

The youngster had an immediate effect on the game and had a few opportunities to score but his composure in front of goal let him down.