Bafana face Libya in March at a venue yet to be confirmed and coach Stuart Baxter's charges will be looking to qualify for next year's Africa Cup of Nations (Afcon).

Mosimane said he hoped that Sundowns’ comprehensive win over Ahli Benghazi would send a strong message to the Libyan national team players.

“I told the guys that we need to sent a strong message to Libya that South Africa is strong‚” he said.

“When Bafana Bafana goes to Libya‚ they should never be afraid.

"It was just to show that it is possible and to give confidence to Bafana Bafana.

"When they go there‚ they actually don’t need to win because a draw will be enough.

"Some of my players are going to meet these guys on the same pitch‚ they must never fear anything and that is the benefit of the Champions League to the nation.”

Sundowns qualified for the Champions League group stages for the fourth year in succession after the win and Mosimane said they did it to reward everyone who is associated with club.

“To put the team in the group stages is very important for the club and that is what I highlighted to the players‚" he said.

"I told them that this game is not for anybody but for the club because the club has been supporting us.

“It is the culture and it is the right thing to do because we have a board and president who says just go for it.

"They have been supporting the Champions League for a long time and we don’t have an excuse not to take this team to the group stages.

"It is also important for players like Phakamani Mahlambi and Lebohang Maboe‚” Mosimane said‚ adding that Sundowns is still undergoing construction after losing Khama Billiat and Percy Tau.

“We are a team under construction.

"We are still building but let them play in this tournament because we are preparing for next year.

"We have found a little bit of a structure with Jeremy Brockie playing as a nine even though sometimes he doesn’t score.

"I am trying to build Ali Meza in that position and I am happy that he scored."

Orlando Pirates also qualified for the group stages after beating Namibian side African Stars 1-0 on aggregate and Mosimane said it is good for South Africa.

“That’s what we need because the North Africans always have two teams in the group stages.

"It will be good to play against a South African side in the Champions League or in the Confederation Cup‚ why not.” 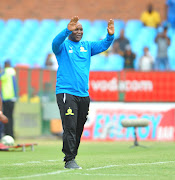