Tignyemb not worried about being sidelined 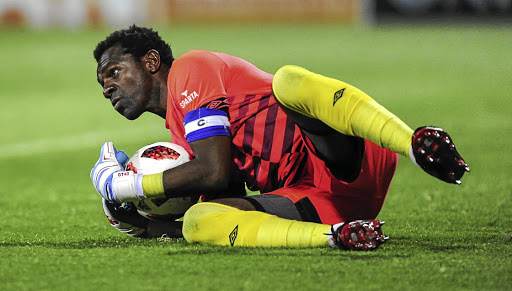 Tignyemb has been the undisputed number one for many seasons at Celtic. In the 2012/13 and the previous seasons, Tignyemb started all the league matches.

On many occasions, only injuries and suspensions have hindered him from starting league outings.

To the bewilderment of many, the Celtic skipper missed his first league match of the season as he was an unused substitute in their 2-1 home loss to Highlands Park on Monday, with Kabelo Dambe getting the nod in goal for the Steve Komphela-coached outfit.

Nevertheless, Tignyemb is not panicking about the possibility of playing second fiddle permanently.

The 33-year-old shot stopper has explained why he was benched against the Lions of the North, and is hoping he will be reinstated in goal against Cape Town City on Saturday.

"I am a player like any other guy here, I am not panicking about sitting on the bench. Football is a team sport, I understand that I won't be playing all the matches. Coach Steve felt I was a bit tired, especially emotionally, so he made that decision."

"Yes, it felt strange to watch from the bench because I've been playing but it's not a big deal. I am positive that I will be back in the starting line-up against Cape Town City and help the club win," noted the Celtic keeper who has conceded 11 goals in 13 league matches thus far.

After starting the season on a high by going five matches without a defeat, Celtic are now winless in their last four league games, with three defeats on the trot against Polokwane City, AmaZulu and Highlands. They are seventh on the log.

"It's not a crisis at all. We are still in the top eight. I think because we have many youngsters, some of them have shifted their focus to festive season and lost focus. But the coach is working on that.''