Itu back in line for Chiefs'starting XI 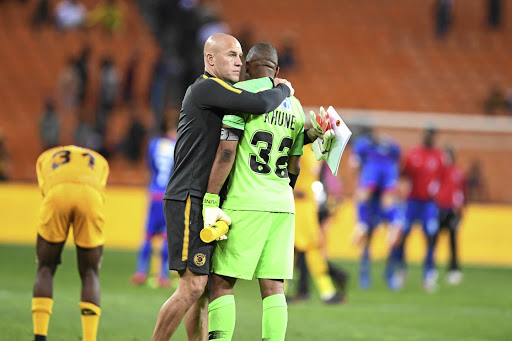 Kaizer Chiefs goalkeeper Itumeleng Khune will need to work hard to reclaim his place in the starting XI with fellow stopper Virgil Vries having demonstrated he is equally capable.

Khune missed the two games under new coach Ernst Middendorp, when Chiefs defeated SuperSport United 1-0 and hammered Elgeco Plus 3-0 in the CAF Confederation Cup preliminary round in Durban at the weekend.

With the Namibian number one doing so well, the technical team may be reluctant to just throw Khune back into the team without justification.

Amakhosi face Elgeco Plus in the second leg in Madagascar on Saturday (1.30pm).

Goalkeeper coach Lee Baxter confirmed that Khune is back in contention after his laceration healed. "Itu is fully fit and is in full training," said Baxter, who also praised the clean sheets from Vries.

"That's where we should aim to be as a club [conceding few goals]. If you look at the top teams around the world, their consistency is key. Even if it's not a clean sheet every week but [the aim is] to minimise the amount of goals we concede."

Maluleka scores for Chiefs as Middendorp hits the ground running

George Maluleka scored a second half stunner to hand new coach Ernst Middendorp victory in his first game back in charge of Kaizer Chiefs against ...
Sport
2 years ago

"The new coach has come in and there are new ideas and a breath of fresh air for all of us. Without getting too excited we are moving in the right direction," he said.

"It's a new way of doing things with the coach. He is vastly experienced and has a very good reputation. It's a good combination with Shaun as well. Many players look up to him."

With the Glamour Boys set to fly out on Friday, Baxter, 42, says it will be a good experience for the entire team.

"It's good to have to travel around Africa because it's a great experience for everybody involved," he said.