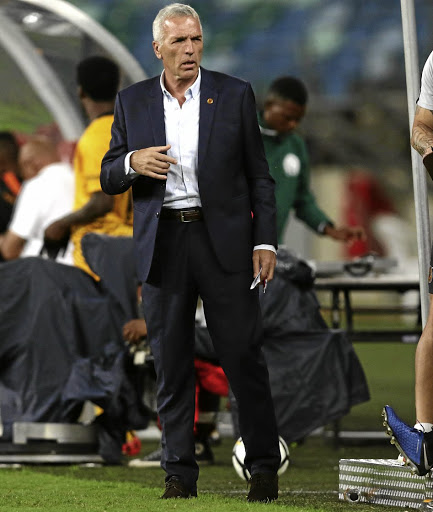 Ernst Middendorp is looking for a buy-in from Kaizer Chiefs supporters.

The German coach would like to see Amakhosi faithful have an understanding of what he's set out to achieve for the club.

Middendorp has urged the supporters not to jeer his players.

He was reacting to supporters who gave brace-hero Leonardo Castro a hard time when Chiefs beat a Madagascan side, Elgeco Plus, 3-0 at Moses Mabhida Stadium at the weekend in a CAF Confederation Cup first round first leg clash.

"I think Leo Castro, we should love him all. He's a fantastic player.

"I like this type of a player. He disappears for a certain moment and then boom, he scores and makes a result. I'm very happy for him that he scored," he said.

Middendorp wants a complete understanding of how each player must function in his system.

Middendorp said Lebo Manyama was not capable of giving 90 minutes at this stage because of an accident setback he suffered. The 60-year-old coach believes Chiefs are strong defensively.

Meanwhile, a couple of Chiefs players have suffered from niggles against Elgeco. Khama Billiat will be assessed this week ahead of the return leg on Saturday. Midfield George Maluleka picked up a hamstring injury and missed the encounter, while goalkeeper Itumeleng Khune was still out after a cut on his hand recently.

"We are not going to Madagascar to defend. We are going there to try to score," Middendorp said.