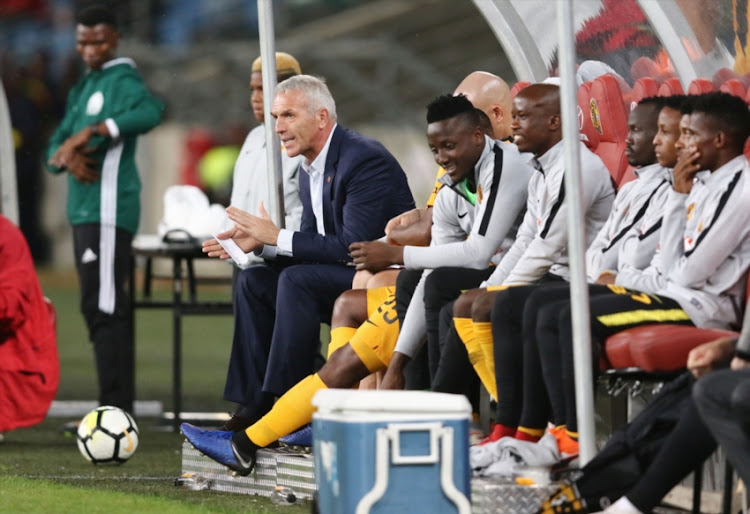 Kaizer Chiefs coach Ernst Middendorp has urged his players to guard against complacency and finish the job when they take on Elgeco Plus FC in a Caf Confederation Cup second leg clash in Antananarivo‚ Madagascar‚ on Saturday.

Chiefs enjoy a healthy 3-0 cushion from the first leg in Durban last weekend through a brace by Leonardo Castro and a lone strike from Philani Zulu.

The strict German mentor‚ who joined Chiefs almost two weeks ago‚ doesn’t want his players to undermine the islanders at the Stade Municipal de Mahamasina on Saturday.

“It is one game at a time‚” said Middendorp‚ who described Amakhosi as “work in progress”.

“I really don’t know what will happen in the next match‚ safe to say we are going back to the training ground to recoup and prepare for the trip to Madagascar.

"We are looking forward to the trip to Madagascar where we anticipate a tough game. But we will give it a go‚ we will do our utmost to proceed to the play-offs‚” said Middendorp.

Before Castro scored his two late goals in Durban‚ which may prove to be crucial in this two legged tie‚ a small section of the Chiefs fans displayed their frustration by heckling him.

Middendorp pleaded with the supporters to get behind all the players rather than unsettle them.

“Castro is a goal scorer and not an entertainer.

"Thankfully he delivered the two goals to give us a good aggregate score going away to play in Madagascar.

"The supporters need to understand the roles of each player‚” he said explaining some of the changes he made during the match.

“Philani (Zulu) was drafted at fullback position to take the place of Godfrey Walusimbi after he was substituted by Siphelele Ntshangase.

"We are just worried about Mario Booysen and Khama Billiat who came out with some niggles after the game but we will them carefully during the week.”