Safa submit Afcon bid‚ but with government yet to give backing 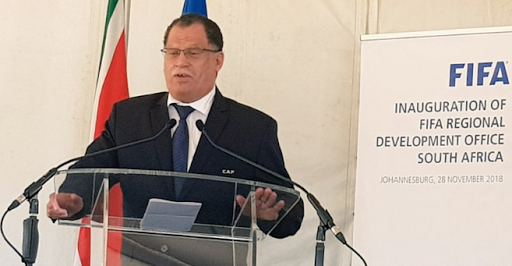 The SA Football Association (Safa) senior leadership, including President Danny Jordaan, met with Sports Minister Tokozile Xasa and Department of Sport and Recreation officials on Friday to establish whether the association could have government support for the bid.
Image: Safa.net/Twitter

The South African Football Association (Safa) have submitted a bid to host the 2019 Africa Cup of Nations (Afcon)‚ but are apparently awaiting various points of clarification before they can have full government approval for it.

Along with submitting their documents for the bid‚ Safa sent a letter to the Confederation of African Football (Caf) asking for clarification on various key points‚ an association official who did not want to be named told SowetanLIVE.

South Africa and Egypt were the only two countries to have submitted bids for the tournament‚ scheduled from June 15 to July 13‚ by Caf’s deadline of midnight on Friday.

The decision will be taken in Dakar on January 9‚ alongside the Caf Awards.

The 2019 Nations Cup was stripped from original hosts Cameroon due to preparation and readiness issues late last month.

Safa’s senior leadership‚ including president Danny Jordaan‚ met with Sports Minister Tokozile Xasa and Department of Sport and Recreation officials on Friday to establish whether the association could have government support for the bid.

However SowetanLIVE is informed that Xasa was not satisfied with the information provided by Safa‚ including lacking the costs of staging the tournament.

The government also apparently wants Caf to commit to sharing television and commercial rights and revenue from ticket sales with South Africa.

Safa communications manager Dominic Chimhavi was asked to respond to the assertion that the Department of Sport were not satisfied with the information provided by Safa.

“That is why we have sent the letter to Caf‚” Chimhavi said on Saturday. “We also need clarification from Caf.”

The South African government has not fully committed itself to hosting the tournament because they apparently want a share of the television rights and ticket revenue from the tournament‚ costs of which runs into millions.

In the meeting on Friday‚ Minister Xasa was not satisfied with the business case that was made by Safa for South Africa to host the tournament.

It is believed that Xasa has briefed President Cyril Ramaphosa on the latest developments but the government is still unsure because Safa have not given them a detailed costing of the tournament.

The SA Football Association (Safa) have hastily retracted a previous statement that they have submitted documents to bid to host the 2019 Africa Cup ...
Sport
2 years ago

“Government has not issued a letter to commit itself to hosting this tournament because there are no sufficient documents relating to the costs‚” said a source who wished to remain anonymous.

“Government officials will have to act responsibly and they can’t commit to something which they don’t know what they are committing to.

“The most important thing here is the cost of this tournament. You must remember that if we host this tournament‚ these games are going to be hosted by municipalities who must provide infrastructure as stadiums‚ training grounds and safety and other related logistics.

“Everybody who is going to be involved must be on the same page if we are to move on and host this tournament.”

With just seven months to the 2019 tournament‚ Caf are believed to favour South Africa as hosts‚ because of the country’s experience of having staged two Afcons (1996 and 2013)‚ stepping in late for both‚ and a 2010 World Cup‚ and their stadium infrastructure.

However the SA government‚ given this is not a normal bid‚ and Caf are asking SA to step in and provide a solution‚ appear to be holding out for the tournament to be able to cost the country as little as possible.

The expansion of the Afcon finals next year from 16 to 24 teams raises further infrastructure concerns.

When contacted on Saturday, Sports Minister Xasa  committed to comment on the story but had not done so by the time of publication, despite numerous calls and messages sent to her.