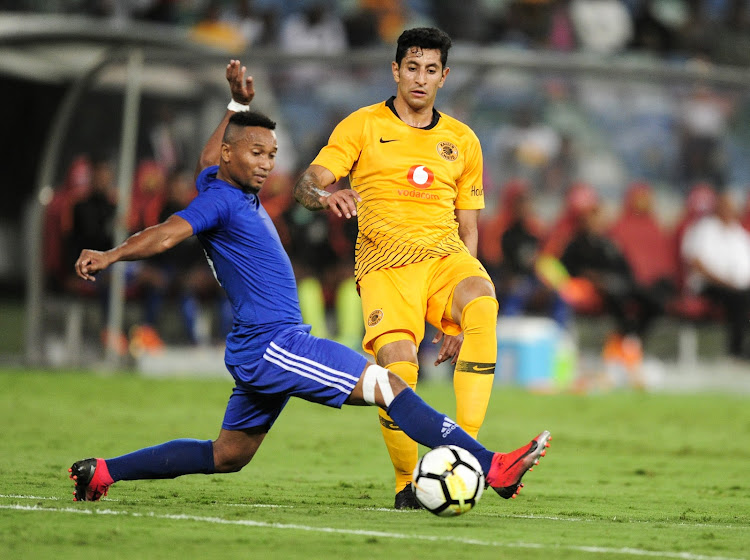 Kaizer Chiefs made a confident stride towards the next stage of the Caf Confederation Cup, and won for a second game since Ernst Middendorp took over as coach, as they beat Malagasy side Elgeco Plus 3-0 in the first leg of their second round tie at the Moses Mabhida stadium in Durban on Saturday.

Philani Zulu hammered home the opener with a superb finish in the 33rd minute at the end of a smart build-up as Chiefs impressed with a new-style passing game and Leonardo Castro got two goals near the end.

The Colombian forward’s 86th minute goal came as much relief and then a penalty in stoppage time could well prove vital over the two legs and was as much as Chiefs deserved.

But it could have been a much more decisive victory had they not rushed matters on a slippery surface in the near-deserted Durban venue.

Chiefs passed the ball around crisply and with pace but made too many errors at decisive moments, betraying a lack of vision or decisive decision-making.

Khama Billiat was the chief culprit, also too often caught offside but for the errors he remained dangerous with his pace and unpredictability.

Castro, too, continued to look bereft of confidence in his finishing after scoring just twice this season but to his credit worked hard for the team

Chiefs also had to contend with some horror tackling and a rather poor hand on the game from young Botswana referee Tirelo Moitswane.

The Malagasy side were well organised, even though largely outplayed, and it will be no easy task for AmaKhosi when they head to Antananarivo for the return game next Saturday, chasing a place in the third round early next year.

The second half saw Elgeco playing a little higher and therefore making it tougher for Chiefs to attack but there were still chances for Billiat, Castro, Zulu and Lebogang Manyama to score.

There was some stout defending to keep Chiefs at bay and it looked tenuous for Chiefs until the 86th minute when Billiat and Castro combined to get the second goal.

Then substitute Dumisani Zuma was brought down a minute into stoppage time and Castro stuck away the third goal.

“We have a good base going into the next game. We deserved this result,” said the new coach after the final whistle .

“We have a week now to prepare before we go off to Madagascar and I’m quite confident we’ll make it to the next round.”

Middendorp said after Wednesday’s win over SuperSport United he did not believe in making too many changes to his side, even if up against underrated opposition in continental club competition, and was true to his word with three changes – two of them enforced.

Kgotso Moleko was not registered for the opening rounds of the Confederation Cup so Daniel Cardoso took his place on the right with Teenage Hadebe coming in to partner Mario Booysen in the centre of defence.

Willard Katsande returned from suspension to replace injured George Maluleka and Middendorp went with the Malagasy international Andriamirado ‘Dax’ Andrianarimanana, against his compatriots, rather than Siphelele Ntshangase.

South African football has been left mourning the death of one of its rising refereeing stars‚ Eketsang Setloboko‚ who died in a car accident on ...
News
3 years ago

Kermit Erasmus says he fell in love with Cape Town City from afar and had no hesitation in signing for the club when approached to come back to the ...
Sport
3 years ago
Next Article