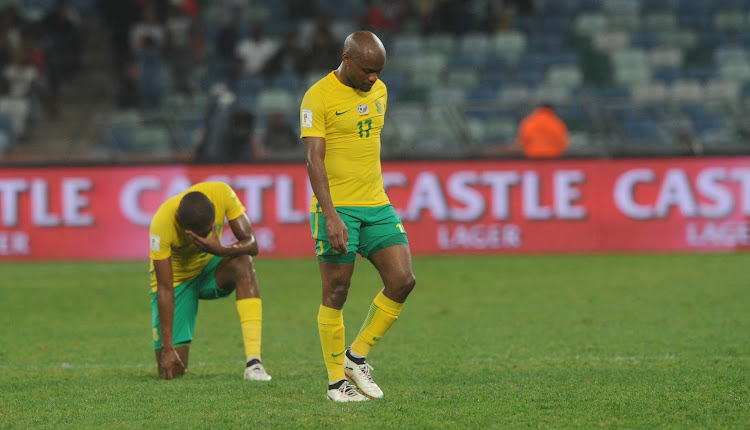 Tokelo Rantie of South Africa dejected during the World Cup qualifier match between Bafana Bafana and Cape Verde in September 2017. The former Orlando Pirates' striker looks set to walk away from football at prime age of 28.
Image: Sydney Mahlangu /BackpagePix

Tokelo Rantie is back in the footballing wilderness and set for a second year without playing after Cape Town City released him from his contract with them without him kicking a ball in anger.

Rantie’s departure has been low key‚ lost amid the excitement at the club at the arrival of Kermit Erasmus to bolster the striking department.

But City chairman John Comitis did reflect on Rantie’s exit‚ giving some insight into what went wrong with the attempt to restart the career of ex-Bafana Bafana striker.

“Tokelo’s issues are personal to him and I don t think [talking to the media] is the right platform for us to be discussing it‚” Comitis said.

“We are still in the background supporting Tokelo and we haven’t completely cut off ties with him. We are basically trying to see what a solution could be.

“In everbody’s career at some point they go through some difficult patches. Some challenges are harder than others and we need to respect that and give him some space.

“He’s a great player and I would love to see him back in South African football but at this stage I’d like to leave it at that.”

Rantie‚ now 28‚ has not played since October 2017 after walking out on his club in Turkey and forgoing a lucrative contract.

He told Genclerbirligi he had to go home for a relative’s funeral and never returned‚ amid reports of personal problems.

The 12 months on the sidelines saw him put on significant weight but City offered him a chance back into the game.

Rantie trained with the side over the last five months and was put on a series of special diet and training programmes but club insiders say he drank heavily.

He is also in the midst of a difficult divorce.

Rantie last played in the PSL six years ago‚ when he was in the colours of Orlando Pirates‚ but they did not retain his contract.

Instead he went to Sweden and surprised by making a major impression as he helped Malmo to the title.

That caught the eye of English club Bournemouth‚ then still playing in the Championship‚ who paid a club record fee to sign him but did not extend his contract when it ran out.

Rantie was the national team’s lead striker before the emergence of Percy Tau‚ and has 12 goals in 41 appearances.

Kermit Erasmus says he fell in love with Cape Town City from afar and had no hesitation in signing for the club when approached to come back to the ...
Sport
3 years ago

Kermit Erasmus is returning to the Premier Soccer League after Cape Town City added him to their squad‚ announcing his signing on Wednesday.
Sport
3 years ago
Next Article