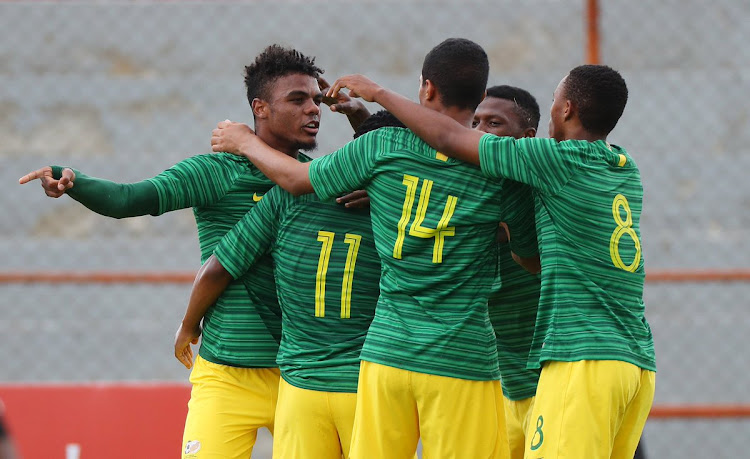 Amajita retained their title at the 2018 COSAFA Under-20 Championships.
Image: TWITTER/SAFA

South Africa retained their title at the 2018 COSAFA Under-20 Championships after a tense final against Zimbabwe on Thursday‚ defeating their rivals 4-3 on penalties following a 1-1 draw.

Goalkeeper and captain Khulekani Kubheka saved two spot-kicks in the shoot-out after earlier being at fault for the Zimbabwe goal as Amajita head to the African Under-20 Championships in Niger next February with their regional trophy retained.

Delic Murimba had given Zimbabwe a second half lead but the prolific Lyle Foster from Orlando Pirates scored for the fourth game running to level matters and leave both players top of the scorers list for the tournament with five goals.

The game went to a shoot-out and Kubheka proved the hero‚ making two fine saves to take his side to the victory.

Nkosingiphile Ngcobo from Kaizer Chiefs had a first real sniff of goal for South Africa but his shot was blocked for a corner and from the resultant set-piece‚ SuperSport United’s Luke le Roux saw his header tipped over the bar by Zimbabwe goalkeeper Tinotenda Ali.

Foster had an excellent chance to give Amajita the lead just before the half-hour mark‚ showing his immense strength to burst through the Zimbabwe defenders‚ but clipping the ball side of the post.

But it was Zimbabwe who broke the deadlock against the run of play‚ a poor back-pass from Ngcobo giving Murimba the opportunity to chip Amajita goalkeeper Khulekani Kubheka and score his fifth goal of the competition.

It was also the first goal South Africa had conceded in Zambia.

While there will be questions asked all round‚ captain Kubheka‚ who is loan at National First Division side Cape Umoya United from Mamelodi Sundowns‚ did not help matters by rushing off his line to the edge of the box when there was defensive cover.

The assistant referee lifted his flag for offside though with that looked a very tight call.

Amajita were level on 84 minutes though and it was Foster again to the rescue again‚ as Player of the Tournament Promise Mkhuma from Sundowns controlled a ball into the box and put it on a plate for the Monaco-bound striker.