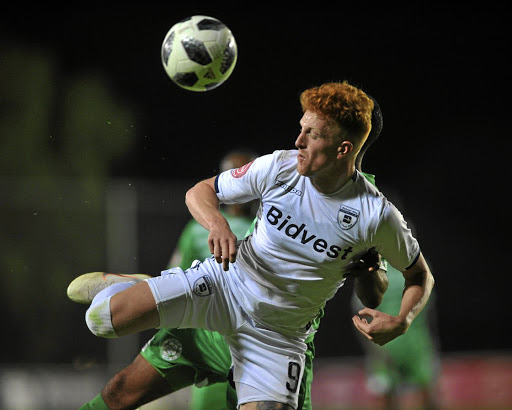 Simon Murray of Wits may prove a handful for the Arrows defence.
Image: Sydney Mahlangu/ BackpagePix

Bidvest Wits' bid to stay in contention for the Premier Soccer League title could be hindered by the confident-again Golden Arrows when the two sides meet at Bidvest Stadium tonight (7.30pm).

Wits are coming off a 1-0 win against Black Leopards in Thohoyandou, but before that they had suffered two consecutive defeats in the league - to Bloemfontein Celtic at home and away in the Telkom Knockout semifinals to eventual champions Baroka.

The Clever Boys' home league form has been questionable this season, with three wins and three losses from six matches.

For them to challenge for league honours, they will have to be stronger in their back yard and Gavin Hunt's charges will be relishing the challenge.

Arrows, meanwhile, will have to prove they have really turned the corner after beating Kaizer Chiefs 2-1 in their last encounter earlier this month.

Clinton Larsen's men may be struggling, but they haven't done badly away. During their travels they have won one match, drawn four and lost one.

Last season, Arrows surprised many by beating Wits 3-1 at Bidvest Stadium and will be looking for a repeat of that performance.

But Wits won the last outing 2-1 in KwaZulu-Natal in the second round in February.

Wits striker Simon Murray, who's on four goals this season, could be key for the home side.

Arrows, however, can call on the likes of Knox Mutizwa to help them get the goals against the hosts.