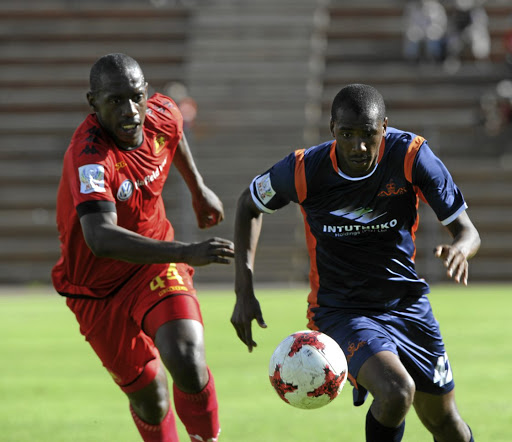 Phumelele Bhengu, right, is marked by Christoph Komane of Highlands Park in this file picture. / BackpagePix

Forgotten ex-SA Under-23 international Phumelele "Ace" Bhengu reckons his National First Division (NFD) record of 22 goals in the 2014/2015 season will remain intact for a while.

Bhengu, 29, achieved this feat while on the books of the now-defunct Thanda Royal Zulu.

While he wants his achievement to be surpassed, the former SuperSport United goal-poacher feels current NFD strikers lack determination.

"To be honest, I do not think my record can be broken anytime soon. You can see that strikers lack the hunger nowadays.

"Yes, it would be great to see someone scoring more than 22 goals in one season, but I do not see it happening soon," Bhengu told Sowetan.

The unattached Ace, from KwaSwayimane, in KwaZulu-Natal, is training with ABC Motsepe side Alexandra Black Aces as he still fancies a return to the top-flight.

Football runs in the blood of the Bhengu siblings

The camaraderie shown by the Bhengu siblings can be an inspiration to anyone.
Sport
3 years ago

"I am with Aces at the moment just to keep fit. My aim is to go back to the PSL," noted Bhengu.

In the wake of leaving Kings at the end of the past season, Bhengu was embroiled in a contractual dispute with Mbombela United, and he explained how it all happened.

"I had signed a contact but did not take a copy of it. After four days, the Mbombela owner, Oupa [Matsebula] denied that I had signed, insisting there was no agreement," Bhengu reflected on his harrowing experience.

"Oupa belittled me and my entire contribution to football. I had already told my family that I found a job. It all turned sour in a blink of an eye."