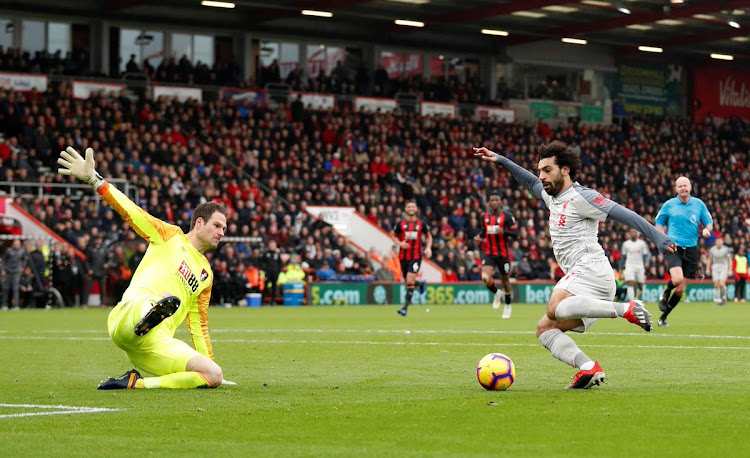 Liverpool Egyptian forward Mohamed Salah dribbles past the goalkeeper to score one of his three goals in a 4-0 Premier League win over Bournemouth on December 8 2018.
Image: Premier League/Twitter

Liverpool maintained their best start to a season as Mo Salah, back at his dazzling best, scored a hat-trick in a 4-0 win at Bournemouth that took them, temporarily at least, to the top of the Premier League on Saturday.

Salah set them on their way in the 25th minute, latching on to the rebound after Roberto Firmino's 30-metre shot was palmed into his path by Asmir Begovic, even though television replays showed the Egyptian to be marginally offside when he pounced.

There was no argument about his second strike straight after the interval when Firmino again freed him to maraud on goal and fire into the corner, with the help of the slightest nick off Nathan Ake's heel.

After the unfortunate Steve Cook diverted Andy Robertson's cross past Begovic for an own goal, Salah worked his real magic, outmuscling Cook to get to Adam Lallana's through ball before dancing nimbly around Begovic and slotting home late on.

Salah's treble at the Vitality Stadium put him on 10 league goals this season, matching Arsenal's Pierre-Emerick Aubameyang at the top of the scoring charts that he dominated last season.

Against tough, seventh-placed opponents, Juergen Klopp's side went a 17th straight league match unbeaten, equalling their club record set 10 years ago, and emulated the 4-0 thrashing of the Cherries in the corresponding fixture last season.

It put them a point clear of Manchester City at the summit on 42 points, though Pep Guardiola's men have the chance to regain top spot later when they visit Chelsea.

It was a splendid afternoon for Liverpool's James Milner to celebrate becoming only the 13th player to make 500 top-flight appearances in the Premier League era.

Salah even gave his own man-of-the match award to his 32-year-old team mate to mark his achievement.

As he clutched the match ball after his second Liverpool hat-trick, the Egyptian added: "It wasn't a bad way at all (to get back among the goals)...I enjoyed the last one the most. I was calm."

Now getting back into his most imperious stride after a slow start to the campaign, Salah added: "My expectations are very high.

"I know everyone else's expectations of me are also very high but the most important thing is for us to win each game and be top of the table."

For Milner, it was a special afternoon after 16 years of excellence in the Premier League. "It's the perfect way to celebrate it (the 500th appearance)," he said.

"It wasn't our best performance of the season by any means but we were efficient, got the job done and this fella (Salah) is unbelievable... He can win you a game on his own."