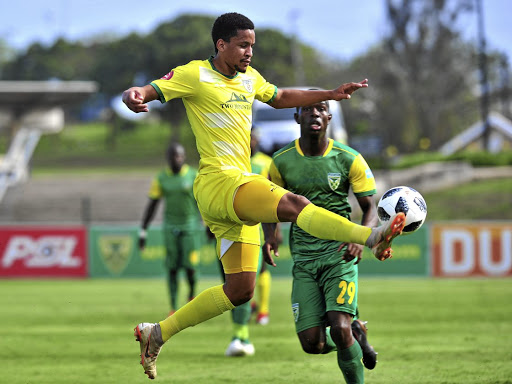 When quizzed about his excitement ahead of the Telkom Knockout final, Jemondre Dickens offered a terse response. "My feet are itching, I can't wait. It feels like the days are not moving quickly enough," he told Sowetan.

Clearly, he needs little motivation ahead of Baroka's cup final showdown against Orlando Pirates in Port Elizabeth on Saturday.

The 20-year-old has emerged as one of coach Wedson Nyirenda's attacking options since they both arrived at the club at the start of the season.

The chap from Elsie's River in Cape Town went from playing in the lower tier SAB League with Riverside Rangers a few months ago to now being on the verge of winning the prestigious TKO cup.

"It has been nothing but hard work. At the start of the year I was playing down there in the SAB League and I never thought 2018 would end like this," he said.

"One of the scouts at Baroka saw me at a tournament while I was playing there and told me they want me to move to Limpopo. As you can imagine I am from Cape Town and moving all the way to the province is something I did not imagine."

Baroka FC stand on the brink of a first ever major title as they clash with Orlando Pirates in Saturday’s final of the Telkom Knockout.
Sport
3 years ago

Since making his debut for Baroka against Free State Stars in September, Dickens has not looked back and has made three appearances and has scored one goal.

He was instrumental in Baroka's come-from-behind 2-1 win in the Absa Premiership match against Golden Arrows last month with the equalising goal. At the weekend against Buccaneers' defence that is short on clean-sheets, Dickens will fancy his scoring chances.

The Sea Robbers have conceded a goal in all but five of their 20 games in all competition this season.

This tendency to concede gives Baroka and Dickens hope that they can bring a first title to Limpopo.

"The people here have been hungry for a cup win in a long time so it is up to us not to disappointment them and to give the people what they have been asking for."