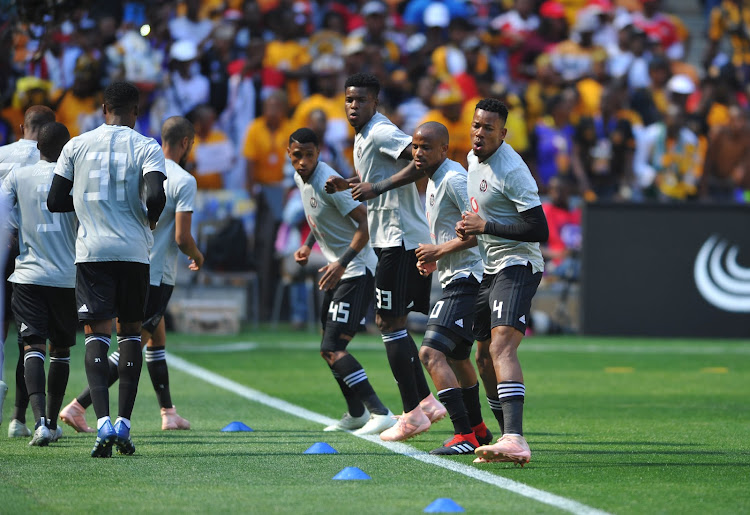 Gv of Orlando Pirates players during the Absa Premiership match between Orlando Pirates and Kaizer Chiefs on the 27 October 2018 at FNB Stadium, Soweto.
Image: Sydney Mahlangu/BackpagePix

Orlando Pirates will be favourites heading into Saturday’s Telkom Knockout final at the Nelson Mandela Bay Stadium in Port Elizabeth‚ with greater experience and star quality than opponents Baroka FC.

That is no guarantee of success‚ however‚ and they will have to be at their best to see off the plucky Limpopo outfit‚ who have a reputation as giant-killers and will relish the chance to lift a first trophy.

There are many potential match-winners in the Pirates aside‚ but SowetanLIVE picks out five players who could be influential on the day.

Jele is a veteran of 12 previous cup finals for Pirates‚ including the African Champions League and Confederation Cup‚ but does not have a happy record.

The stalwart defender‚ now in his 13th season with The Buccaneers‚ will hope it proves a lucky one and he can improve on his three knockout trophy wins to date.

Jele may be in the twilight of his career but his importance to Pirates cannot be underestimated.

He is the only player in the squad to have featured in every single minute of the domestic season so far and brings great experience and leadership to the side.

Left-back Maela is known for his high work-rate and he bombs up and down the wing and his energy will be needed against a young and eager Baroka side.

Having scored no goals in 26 starts for Pirates last season‚ he already has two in this campaign and has noticeably looked to get into more advanced positions.

He has been among the most consistent performers in this campaign for Micho Sredojevic’s side and taken the step up from the National First Division‚ where he played for Witbank Spurs and Thanda Royal Zulu‚ with ease.

There is always much talk around Mlambo and for good reason. When on song he is able to pick apart any defence with his awareness of the spaces and the ability to get the ball into good areas.

There is no doubt he will be targeted on Saturday as Baroka try first to stop him getting the ball‚ and secondly when he does have it give him as little time as possible.

He was rested last weekend by Pirates in the 0-0 draw with Maritzburg United for fear that he might pick up a suspension having already picked up three yellow cards this season.

Perhaps the lesser heralded of Pirates’ Zambian pair‚ but no less important than Justin Shonga to their cause.

Mulenga brings trickery and guile to the attacking unit and compliments the more ‘direct’ forwards well.

It is noticeable that Shonga plays better when his compatriot is on the pitch as the two form an excellent understanding.

Mulenga maybe does not score as many goals as he should‚ but he is also an unselfish player and more often than not looks for the pass over taking a shot.

The Man of the Moment for Pirates as much of their good attacking play flows through Pule these days as he revels in the quality of the ball into him and the freedom to play his own way.

He was not much suited to the long-ball style at previous club BidVest Wits‚ but since moving to Pirates at the start of the season has been a player transformed as he gets the ball to feet.

His movement along the forward line is also impressive and with excellent ball-players such as Mlambo‚ Ben Motshwari and Musa Nyatama behind him‚ it gives them plenty to aim at.