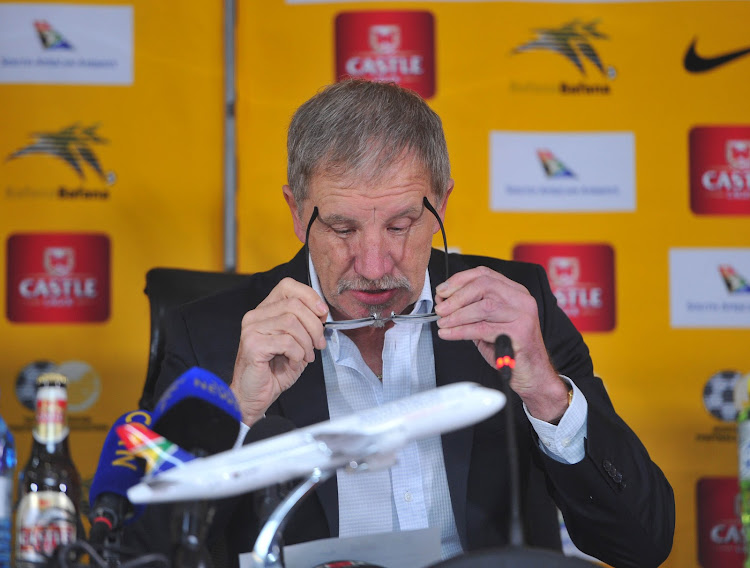 Hosting next year’s Africa Cup of Nations (Afcon) could be a huge boost to the continued development of an emerging generation of Bafana Bafana players‚ national coach Stuart Baxter has said.

Baxter added that it would be a bittersweet opportunity as he and Bafana had wanted to prove they could qualify by going to Libya for the draw they needed from their final Group E game in March‚ which could also have been an important match in the players’ development.

The SA Football Association (Safa) have agreed in principle to honour a plea from the Confederation of Africa Football (Caf) to step in as Afcon 2019 hosts following Cameroon being stripped of the tournament on Friday.

Baxter said he had not had communication from Safa – who are surely also awaiting confirmation from Caf – yet on whether the Libya game would go ahead if South Africa became hosts.

“You don’t want to sort of turn off the competitive nature of the Libya game because someone’s suddenly give you a free pass‚” Baxter said on Tuesday.

“So for me‚ I would say it [hosting] would be great because our strategy was that the players need to take part in a major tournament as a part of their development.

“But I also don’t want to turn off the competitive nature of the players to go there [to play Libya away‚ probably in Tunisia] in a situation with a knife at their throats and actually get the result that they need.

“So‚ if I’m being really honest‚ I’ve tried to ignore it [the potential hosting]. For the reason that I want to keep preparing for this game as if it’s the one that’s going to take us there.”

Bafana have had a mixed qualification campaign.

They started beating Nigeria for the first time in a competitive game‚ away‚ and drew against the Super Eagles in Johannesburg last month‚ and are unbeaten from five games.

Baxter said qualifying as hosts “can be an anti-climax”.

He said Bafana also still have the concerning tendency of blowing matches they should win.

“And therefore the Libya game was yet another challenge mentally. And that’s why it was important for us‚” he said.

The coach‚ however‚ said he is completely aware of how big a prospect playing in a home Afcon can be for emerging Bafana talents such as Percy Tau‚ Lebo Mothiba and Teboho Mokoena.

“We have seen some progress and some green shoots coming through‚” the coach said.

“And it’s difficult if you draw 0-0 against Seychelles to then go out and trumpet the progress you’ve been making. Because in the disappointment of the result no-one wants to hear that.

“But in the bigger picture‚ for one year we’ve been addressing a [youth] programme‚ and at the same time trying to achieve decent results.

“And I’m not going to say we’ve done well. But there have been signs of progress.

“And I think you’ve got to take that and develop it. And if you say let’s send the team to Libya‚ or Tunisia‚ with a knife at the throat – what a great challenge if you’re trying to develop the group.

“Or if you say we can give them a major tournament on home soil‚ also what a great challenge for all these young players coming through.”

Several amendments regarding the National Soccer League (NSL) were deferred for further consultation at a South African Football Association (Safa) ...
Sport
3 years ago

Orlando Pirates' inconsistent run at home may come back to haunt them in their bid to win the Absa Premiership title with the goalless draw against a ...
Sport
3 years ago

South Africa coach Thabo Senong says he is pleased with the start made by his side in their 5-0 mauling of Mauritius in their opening Group B clash ...
Sport
3 years ago
Next Article