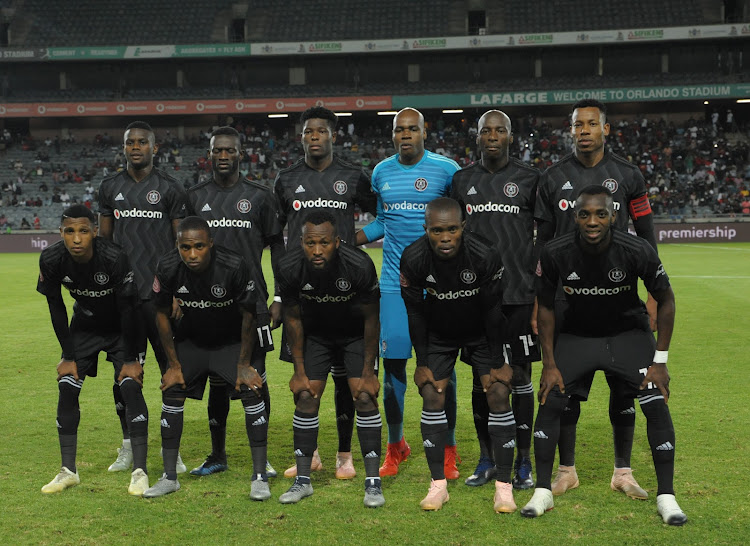 The Orlando Pirates' team that started the Absa Premiership match against Maritzburg United at Orlando Stadium in Soweto on December 1 2018.
Image: Aubrey Kgakatsi/BackpagePix

Orlando Pirates’ punishing schedule continued as they prefaced their Telkom Knockout final on the weekend with a 2am flight to Seychelles to meet Light Stars in the second leg of their Caf Champions League preliminary round tie.

Pirates left from OR Tambo International Airport at 2am on Tuesday morning for a five-hour flight to the main Seychelles island of Mahe‚ then a short‚ 15-minute hop on to Praslin‚ for Wednesday’s match-up‚ where they will enjoy a 5-1 lead.

The Buccaneers‚ the 2013 losing finalists against Egyptian giants Al Ahly‚ made their return to Champions League football after a five-year absence in last week’s first leg at Orlando Stadium.

They should expect a comfortable passage through the second leg (kickoff 4pm in the Seychelles‚ 2pm SA time) against the Indian Ocean islanders at Amitie Stadium‚ though coach Milutin Sredojevic said Pirates were leaving nothing to chance.

“The squad is ready and the players are showing that they all want to win this away match‚” Sredojevic said.

“We don’t undermine any team – this isn’t a Pirates thing to do. We respect every opponent that we face – this is why we are approaching this match the same way as we would approach any league match.

“While we carry all the expectations from our supporters to perform‚ Light Stars come into this game without any pressure. But be that as it may‚ we are a team used to pressure.

"Pressure is part and parcel of being part of a big team.”

The Buccaneers return to South Africa on Thursday with just two days to turn their attention to Saturday’s Telkom Knockout final against Baroka FC at Nelson Mandela Bay Stadium in Port Elizabeth.

Pirates will seek their first trophy since the 2014 Nedbank Cup‚ and Sredojevic’s first at Bucs in his second season there.

The Soweto giants are currently facing a spell of seven matches to be played in 25 days‚ including continental travel.

Orlando Pirates coach Milutin Sredojevic says his side will have to vastly improve their record at home if they are to be taken serious as Absa ...
Sport
3 years ago

Orlando Pirates winger Thembinkosi Lorch has had an astounding start to the new campaign.
Sport
3 years ago

Orlando Pirates' inconsistent run at home may come back to haunt them in their bid to win the Absa Premiership title with the goalless draw against a ...
Sport
3 years ago
Next Article