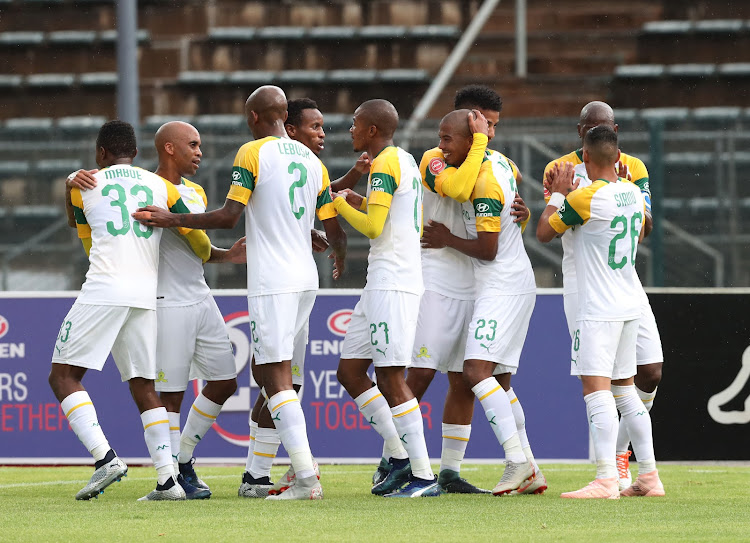 Mamelodi Sundowns moved to within touching distance of Absa Premiership leaders Orlando Pirates when they claimed local bragging rights with a 2-1 victory over Tshwane rivals SuperSport United at a sodden Lucas Moripe Stadium on Sunday.

Goals from Lebohang Maboe and Lyle Lakay had Sundowns 2-0 in front in the first half‚ but when Morgan Gould pulled a goal back for Matsatsantsa‚ it set up a tense finish.

Sundowns were able to hold on as the sun came out at the close of the game‚ a symbol perhaps of their elevation to championship favourites as they now trail Pirates by just three points with three games in hand.

It was a deserved victory for The Brazilians‚ who might have won by a greater margin but for some profligacy in front of goal‚ though they will just be relieved to have come through a difficult week of travel with the three points.

Coach Pitso Mosimane handed a first domestic start to defender Rivaldo Coetzee after 16 months on the sidelines with injury‚ with the former Bafana Bafana star playing his second game in a week after debuting away against Leones Vegetarianos in the African Champions League in midweek.

It will be relief for both the player and the club that he is able to play two games in quick succession having been a big-money signing from Ajax Cape Town in August 2017‚ but so far has been unable to feature for the Brazilians with his career-threatening knee injury.

There was also just a third start of the league season for Oupa Manyisa as Mosimane begins to get some of his walking wounded back.

Sundowns were ahead on 10 minutes when Leboe picked up the ball 25-yards from goal and his pinpoint low drive nestled in the bottom corner with SuperSport goalkeeper Ronwen Williams helpless.

It should have been 2-0 on 27 minutes but Uruguayan forward Gaston Sirino slipped at the vital moment as he looked to turn home the ball from Thapelo Morena’s cross while in an unmarked position in the box.

They did get a second five minutes later though as Maboe turned provider‚ his clever through-ball perfect for Lakay to lash the ball home at the far post against a static Williams.

Themba Zwane was having a fine game for Sundowns and he came close to the third with a brilliant solo run that ended with him rounding Williams‚ only to see his effort cleared off the line.

Mosa Lebusa produced a goal-saving clearance shortly after the break to deny SuperSport‚ but the home side did find a way back into the contest when they pulled a goal back midway through the second period.

Substitute Aubrey Modiba floated in a set-piece and Gould planted his header into the back of the net to reduce the deficit.

Toni Silva should have made it 3-1 Sundowns with five minutes to play‚ but he shot wide with just Williams to beat.

But it mattered little in the end as Sundowns closed out the game to continue their dominance over SuperSport‚ who are now winless in their last 16 Tshwane Derby games.