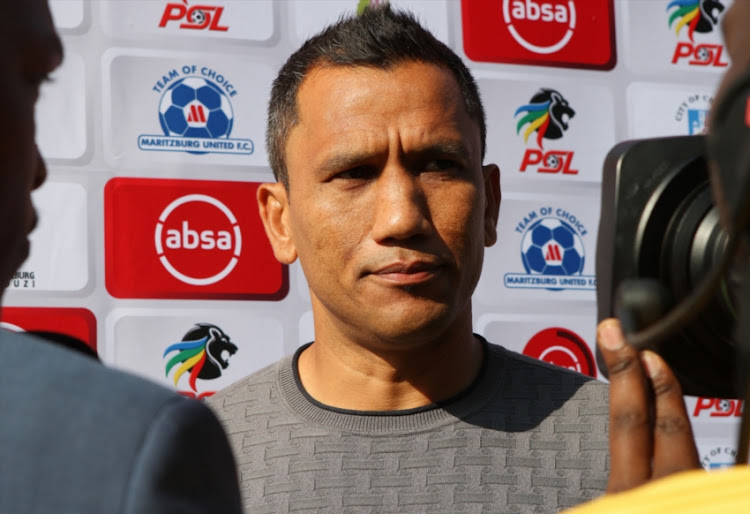 Embattled Maritzburg United coach Fadlu Davids was happy to survive another day at the office after his side held premiership leaders Orlando Pirates to a goalless draw at Orlando Stadium on Saturday night.

The 37-year-old coach‚ the youngest in the PSL‚ is believed to be holding onto his job by the thinnest of threads after a bad start to the season.

“They (the Maritzburg management) know the work that’s been put in and they know it’s definitely there for us to turn it around.

"It’s only rumours (that he will be fired) and no truth to it‚” said Davids.

Maritzburg earned their 10th point in 11 matches after the draw but they are still precariously positioned near the bottom of the table.

But Davids was satisfied with point and felt that his team could have managed a “smash and grab” victory had they taken the few chances they created on a humid night in the south of Johannesburg.

“It was like a chess match out there and we changed things around during the game‚” said Davids‚ who finished fourth on the log with Maritzburg in his first full season as a head coach.

“We had chances and it could have been a smash and grab kind of win in the end but we have to take it (draw) as a positive as a young team.

“We must take this as a small victory and build confidence from there and use this to turn the corner and get our second win to kick-start our season.”

Davids believes he still has the support of club chairman Farook Kadodia and he insisted that he's not worried.

“I’ve got the full support of the chairman (Kadodia) and that’s really the situation‚” he said.

“Last season I was in the similar situation and perhaps another chairman of the club would have sacked me.

"But we went on to contest a cup final (Nedbank Cup and lost to Free State Stars)."

After selling their playmaker Lebohang Maboe to Mamelodi Sundowns at the start of this campaign‚ Maritzburg have struggled to win matches with the link to the strikers falling way short of the desired expectations.

United are 12th on the standings with 10 points‚ courtesy of a better goal difference that places them ahead of AmaZulu‚ Baroka and Chippa United who all have the same number of points.